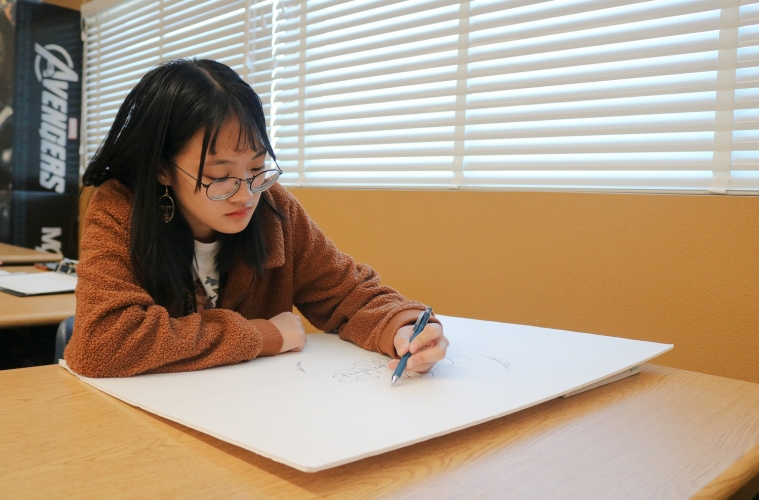 Working on her project, sophomore Jennis Phung makes a headline on her poster board. Students in Spanish II classes researched different cultures to gain a better understanding of various traditions across the world. “I love the quote that says 'everything happens for a reason' and my group is is applying this to other cultures such as Ethiopian and Hawaiian culture,” Phung said. “Personally, this project is really fun as we get to make connections between two cultures and relate them to one another and this project has also brought me closer to some people.” Photo Credit: Gurleen Swaich

To gain a better understanding of different cultures, students in Nathan Jayme’s Spanish II classes are making a culture project.

“It’s my goal to embrace cultures and diversity and it allows students to be able to share what they’ve learned in celebrating Hispanic culture in the Latin American community at school,” Jayme said.

Students will be taking a topic in cultures, such as hand gestures, and relating their cultural backgrounds.

Students will be presenting their projects on Friday in the ballroom. Rather than a formal presentation, students from other classes will act as the audience during a gallery walk

“Bull-fighting was the first thing that came to my group’s mind because of how intricate it is,” sophomore Ivan Wu said. “I hope to have a broader understanding of bullfighting and how it is viewed in Spanish speaking countries, as well as relate it back to our diverse backgrounds.”

Students will be graded on research and presentation skills.

“Every culture has different gestures that they use to greet someone and my group wanted to bring in Filipino, French [and] Hispanic culture into this,” sophomore Brinn Harms said. “This project is allowing me to incorporate ideas that I learn from Spanish and see how different people change cultures and make them their own.”