English 10 students prepare for presentation in place of semester exam Based off of an ancient text, time period 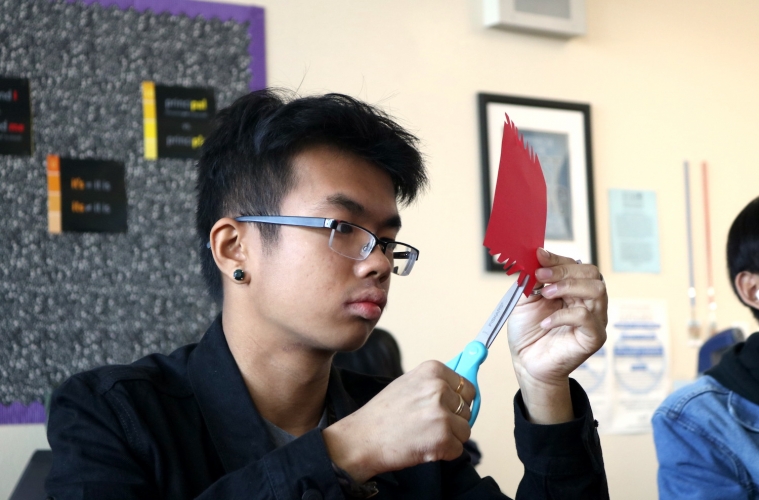 Instead of a semester exam, students in Ms. Amy Lutz’ English class are performing a puppet show. The puppets are based off of characters in the Code of the Samurai, Heian time period and the Japanese Bunraku theater. “I’m making a samurai puppet for my play about education during the Heian time period,” sophomore Bryan Tun said. “I think the hardest part of making my puppet is putting it together off of an image I made in my head without a draft or reference.” Photo Credit: Gurleen Swaich

Instead of taking a standard multiple choice test as an exam, sophomores in Amy Lutz’ English class are performing puppet shows based off of the book read in class, “Code of the Samurai,” the Heian time period and the Japanese Bunraku Theater.

“We do quite a bit of formal writing with essays and reading complex texts during each quarter,” Lutz said. “When it comes time to show our skills from the semester, there are lots of creative ways that we could show what we’ve learned. In this case, a puppet show is much more fun and creative than another essay.”

In groups of three to four, students were randomly assigned a chapter from the book. Groups are then required to explain the theme of that chapter through Bunraku, an ancient form of Japanese puppet theater.

“[My group and I] are making puppets to help support our project and our theme,” sophomore Kylie Chavez said. “The difficulties I faced were figuring out which puppet correlates with each character from the story we have.”

The puppets will be handmade from various materials such as paper bags, googly eyes and other simple art supplies. Each character can have a modern, ancient or animal theme.

“[The puppet show] takes a lot of stress off because we don’t really need to study much for anything,” sophomore Cheri Chan said. “Since we’re already busy studying for other classes, this helps a lot.”

Groups will be graded on their show’s clarity, entertainment and understanding of ancient Asian cultures. Students will present their puppet shows on the day of their exams.

“This project should allow students to learn more about ancient Japan historically and through literature,” Lutz said. “It will complete our quarter focused on Asian writing and culture.”