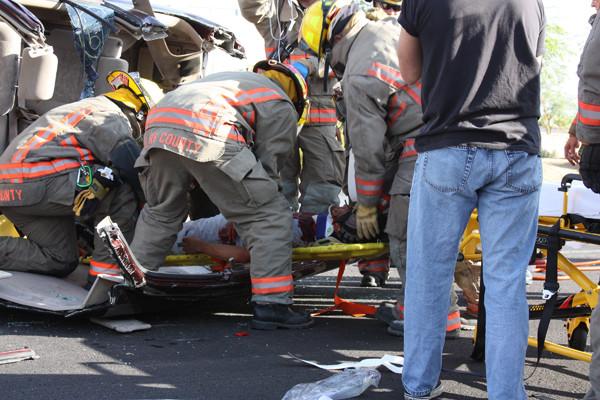 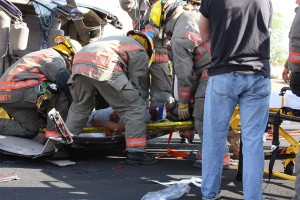 On October 21, 2010 at approximately 8:25 a.m. a two-vehicle collision was staged on West Shelbourne Avenue in front of Southwest Career and Technical Academy as part of the “Every 15 Minutes” program.

The entire event was staged with the cooperation of the Las Vegas Metropolitan Police Department, Clark County Fire Departments, Mercy Air, University Medical Center, Palm Mortuary, Las Vegas Coroner’s office, and others. The goal of the program is to provide a scenario that mimics a drunk driving accident to teach students about the dangers of drinking and driving.

“It made me realize the possibility of it happening to the people closest to me; I will treasure all the times I spend with them,” states junior Nichelle Mesa.

The two vehicles were from an actual car crash that was reconstructed on Shelbourne: a white sedan, which received little impact from the collision, and a red SUV, which was rolled over onto its side.

Upon searching the white vehicle that contained two students, police found multiple beer bottles that had been strategically placed in the vehicle earlier. The police proceeded to administer a DUI Test and “arrested” junior, and “drunk driver,” Kacie Fox.

Arturo Ochoa-Zepeda, junior, was the passenger in the vehicle in which Fox was the driver. Ochoa’s makeup displayed a head injury from the crash and he was escorted to UMC Medical Center in an ambulance as a part of his role-play.

Corey Tyndall and Paolo Lee were selected to participate as victims by their teachers for being leaders within our school.

Tyndall was pulled out of the vehicle first, but was pronounced “dead” at the scene after she had suffered severe injuries. The Las Vegas Coroner’s Office visited the crash to document the scene/body and transport Tyndall in a body bag to the coroner for an autopsy.

“Nobody was talking. It was like you had witnessed the accident live,” exclaimed junior Ryan Lopez.

Lee sustained critical injuries and was transported in Mercy Air to UMC Medical Center. He “died” during transport.

“We’re so used to seeing them everyday, laughing and smiling, so watching them being pulled out of an overturned vehicle covered in blood was just heartbreaking,” comments junior Adrienne Lapid.

After the tragic incident, Principal Felicia Nemcek read Tyndall’s and Lee’s obituaries to the student body. Once both obituaries were read, the police and fire department answered students’ questions about the crash.

“I felt depressed with the thought, ‘If they literally died, I wish I was able to look out for them somehow to prevent it,’” added junior Jang Glache Parco.