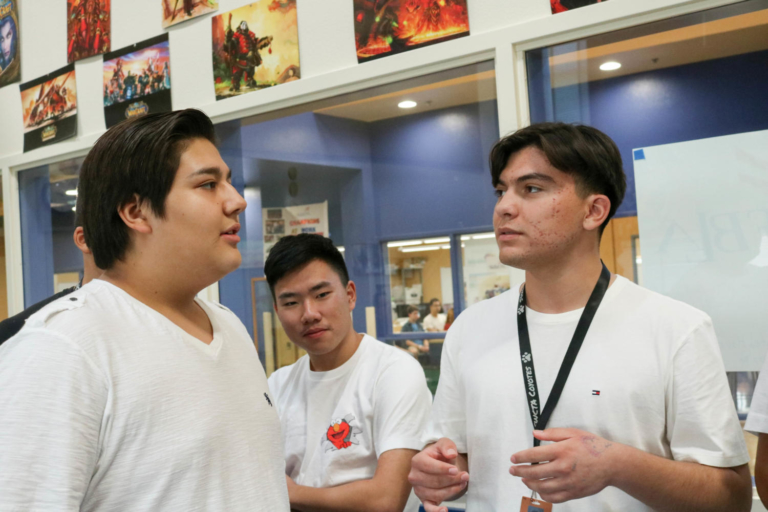 Preparing for the meeting, seniors Vergil Schreiber, Nick Tan and Jacob Guevara hangout and talk. FBLA prepared for their annual basketball game. "Since we don't have any sports teams, I think it's a good idea," Guevara said. "It allows students to enjoy themselves in a competitive environment." Photo Credit: Kenneth Talusan

To raise money for their state tournament, Future Business Leaders of America is hosting their second annual basketball game on Nov. 19.

“We wanted to give students a chance to play sports against their peers because we don’t have actual sports,” FBLA adviser Ronald Barranco said. “This is a fun way for them to play basketball in a tournament style, rather than in PE.”

The money will go towards buying the club’s shirts, along with paying for the Nevada FBLA State Business Leadership Conference that is taking place on April 19 and 20.

“I decided to help out the second time again because it’s a really fun event with a lot of good vibes,” FBLA President April Valdez said. “I love watching everyone be super excited and competitive because everyone is enjoying the game.”

The tournament allows for as many teams to participate as interested.

“I’m competing in the FBLA tournament not only because I love to play, but also [so] I can represent the strength of FBLA,” FBLA Vice President Chad Falvey said. “I love to compete and I want to display the competitions we bring to students.”

Each team needs to have three players and one substitute, playing half court. Fees to enter are $15 per team. The top three teams will receive gold medals and gift cards. All students are allowed to attend to watch the game at no cost.

“I hope the members learn how to be independent and run an event because it’s all students ran,” Barranco said. “I want to see that I can trust them with such a big responsibility and I hope they learn the skills for the future. I want them to be the leaders I know they can.”