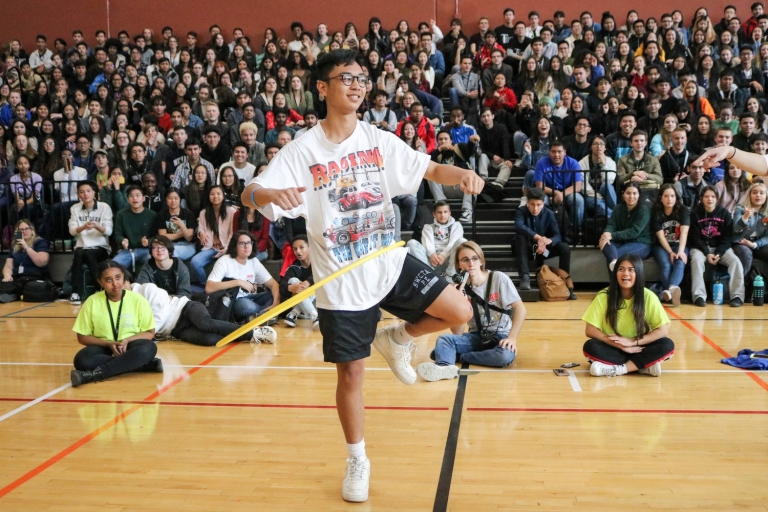 In an attempt to win the last game, Rudney Gano hula hoops while balancing on one leg. At this year’s assembly, the top four teams will go head-to-head for gold, silver and bronze medals. Photo Credit: Kyle Bayudan

Continuing on with tradition, the annual Coyote Games will be taking place the week of March 2 after school from 2 p.m. to 4 p.m.

“I decided to participate this year to make memories with my friends and the ones that won’t be here next year,” junior Ailani Palma said. “I hope the games are very competitive and enjoyable enough to the point where I can laugh a lot. “

Only 24 teams will be allowed to play each consisting of six members with two extra as substitutes. Sign-up forms can be picked up in room F102 and have to be turned in by Friday, Feb. 28. A $15 fee is due to the banker for each team.

“I’m feeling optimistic about this year’s games,” Student Council President Elizabeth Wiggington said. “There’s going to be a lot of moving parts throughout the week. We have two days of 10 bonus games, each for team to participate in while they wait for their turn on Tuesday and Thursday.”

Unlike previous years, there will be audience participation games during the assembly since only one club is performing.

“The [audience participation games] are new this year,” Wiggington said. “We wanted to see how they would work out since we have some extra time with only one club performance at the assembly. Only one club is interested in participating as [K-Pop and Poly] are preparing for the senior send off assembly.”

After points are calculated at the end of the week, the top four teams will be able to participate in mini games at the Coyote Games assembly. Dance Club will also perform at the assembly.

“We’re almost done with our routine, so technically, [we’re not ready] yet, but we definitely will be,” Dance Club President Kennedy Nelson said. “We’re all super excited about performing again. We really just want to create an enjoyable experience for everyone involved. I hope I’m able to prepare [my members] well enough to get in front of people and truly perform confidently.”