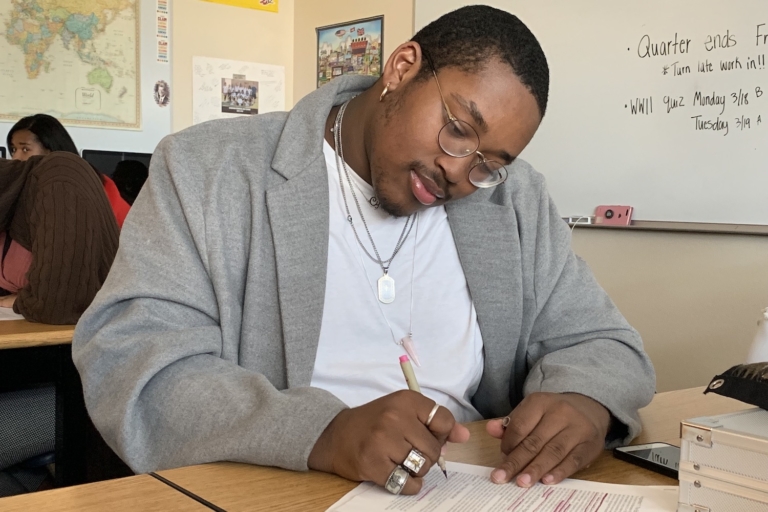 Researching why the U.S. shouldn't have dropped atomic bombs on Japan in World War II, junior Cyncir Pollard highlights key points he will use in his argument. Students were given pages of information to make their research easier. “I think that’s this topic was very interesting because it was a key part in America's involvement in World War II,” Pollard said. “The debate helped us understand it much better than just sitting there looking at a board.” Photo Credit: Alyx Beeten

Ending their Pearl Harbor segment, students in Mr. Pate Thomas’ U.S. History are debating whether or not the United States should have dropped two atomic bombs on Japan in World War II.

“The side I’m on is against the bombs,” junior Jocelyn Peralta said. “It’s interesting to see both sides and be able to understand how each side felt about the bombs and the reasoning behind them. It’s better to learn [about] the topic first because we have to make the information stick in our mind.”

Working in partners, students worked together to form arguments that supported their sides of the debate. Since his recent promotion to an administration position, Thomas’ classes have been taught by long-term substitutes.

“I decided to do this assignment so students could understand why the American government dropped the bombs and the Japanese side of why the United States should not have dropped the bombs,” long-term U.S. History substitute Carly Peterson said.

Students were given the beginning of class to do their research. Once they completed the research portion, they proceeded with a class debate.

“I believe the students did very well,” Peterson said. “As I was walking around during the debates, I enjoyed listening to the different groups and the arguments they chose to use. I also was pleased with the way they handled themselves. For the most part, no one got loud and people were debating rather than arguing.”

In order to receive full credit, students also had to prove that they understood the opposing side’s arguments. Each pair had 25 minutes to debate their side.

“My favorite part about this assignment was listening to the students debate against one another,” Peterson said. “It allowed me to see a different side of the students than I normally do. Two classes really shocked me with their participation, which was my first and third period.”