Juniors in US History roleplay as historical figures Discussing issues of the early 19th, 20th centuries at a 'dinner party' 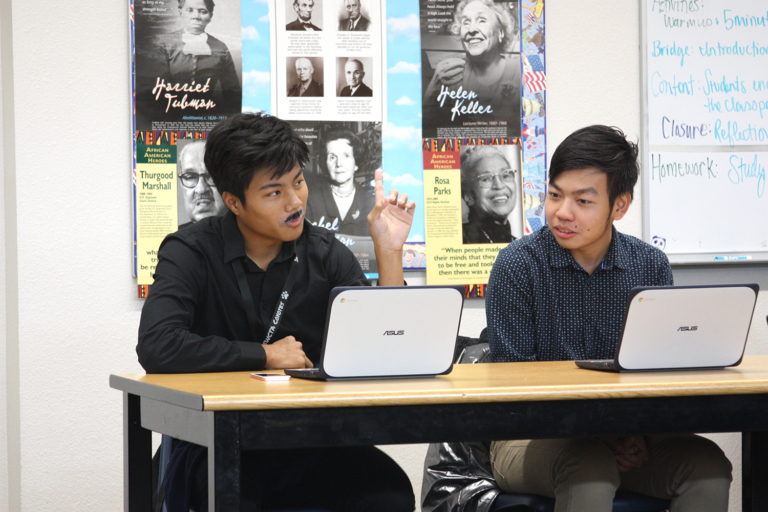 Arguing over child labor, juniors Sean Alignay and Zehui He discuss their views. Students sat in a circular seating arrangement that represented a dinner party. “Everyone got very heated and it was enjoyable to learn about these famous views on important topics,” He said. Photo Credit: McKenna Thayer

To understand the issues of America from 1880 to 1914, juniors in Ms. Jessica Kelly’s US History classes roleplayed as important historical figures to discuss their different perspectives at a fake dinner party.

“I like for students to get a deeper understanding of history and a way you can do that is through role playing important people in history,” Kelly said. “I chose the dinner party because it allows [students] to talk in a comfortable environment with each other.”

Students were required to choose and research their figure, such as Nikola Tesla and Theodore Roosevelt. Some of the topics included child labor, unions and capitalism.

“Since we were allowed to pick whoever we wanted, I was nervous someone else would choose the person I wanted most,” junior Maya Negash said. “I got who I wanted, which was Booker T. Washington. I wanted him most because I wanted a person who fought for African-American rights and I wanted to call people out on their racism.”

Juniors were graded on their participation and personal research. The more students spoke, the better the grade they could earn.

“Although, some topics my person never spoke about, I tried to participate as much as possible.” junior Stephen Bingham said. “If my person had a lot of opinions on one specific topic, I would never stop talking about it. I tried to engage other people to because this is our last project of the semester, so I wanted to end on a high note.”

If a student was absent, they were required to come after school on Dec. 13 to make up their assignment. To transition into the next unit, the final debate topic was about World War I.

“I think the hardest part is understanding where people are coming from and also interacting with other people while ‘in character,’” Kelly said. “This is due to the fact that not only should you have a grasp of the historical person you are but how that person would’ve interacted with others, like what would Upton Sinclair say to Jane Addams.”