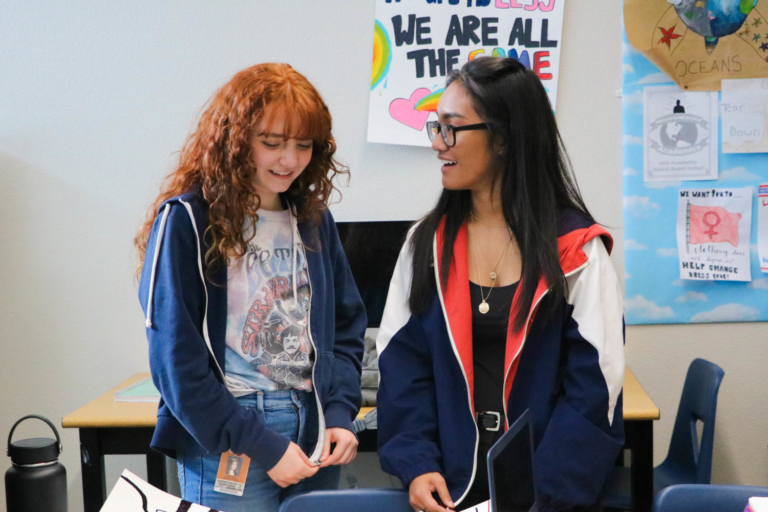 While looking at other groups posters, juniors Abigail Fitzpatrick and Caelen SanAgustin read information on various topics. Students were given one class day to finish their posters. "My friend and I were looking at one of the posters for the 1920s gallery walk," junior Caelen SanAugustin said. "This helped me understand what it was like being in [this era] because it showed how people lived, how they thought and how they’re discovering new ideas and styles." Photo Credit: McKenna Thayer

Implementing a new and different way of learning to understand the effects of World War I on America, US History teacher Jessica Kelly started a project for her classes to create posters that visually presented post-war events.

“My inspiration for this project is culture because students can actually immerse themselves into some aspect of American culture and try to manifest it on a board or poster,” Kelly said. “It hits the critical thinking points and analysis skills of students.”

Students were required to choose and research an event that occured in the 1920s in small groups. Some of the options included art, education, media, jazz and other leisure activities.

“For my cultural event, my group chose film because we all really like movies and thought it would be cool to see where they originated,” junior Dominic Lepore said. “For our poster, my group drew a movie poster from an old Charlie Chaplin movie. We did this because silent film was very popular in the 20’s and Charlie Chaplin was one of the most influential and widely known actors of the time.”

After finishing their posters, the students participated in a gallery walk. Instead of listening to a lecture, they took notes on the projects.

“This project helped me further my knowledge of events after World War I because it taught me that the big boom of money  made everything more accessible to middle and working class people,” junior Faith Nole said. “I liked that this project didn’t just focus on the bad parts of World War I like the casualties, but it focused on a lot of positive aspects as well.”

Kelly hopes that this project increased students’ knowledge over the effects of World War I.

“I don’t really do worksheets because they are boring and a lot of students cheat on them and I can’t always talk,” Kelly said. “Sometimes, students have to be responsible for their own learning so I feel like that’s why I incorporate things like the gallery walk. I’ve been doing this project for a while now and I keep doing it because it’s fun and I get to listen to jazz while students do the gallery walk.”