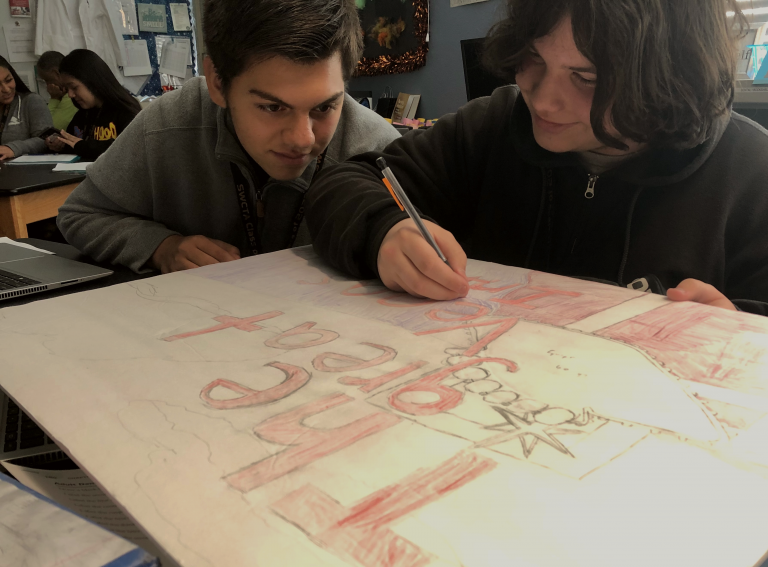 Sketching background elements into the art, sophomore Laur Drumea works on his advertisement board for his escape room. One of the elements of the breakout box, the board serves to attract students to try the escape room at the end of the project. “I’m trying to make a post apocalyptic background for my poster,” Drumea said. “Since our backstory for the escape room is a destroyed Vegas, the drawing should fit in well with the story.” Photo Credit: Kamiran Hinton

To understand diseases and how they spread, students in Dental teacher Kirsten Winfield’s medical terminology class are working on a ‘breakout box’ project.

“The breakout box project serves as a way for students to represent their creative skills to each other and learn how diseases work and spread at the same time,” Winfield said. “I’m excited to see the final projects and how well the students solve each other’s escape rooms.”

The breakout box project tasks students with creating a backstory where a real disease causes a ‘zombie outbreak.’ The goal of the players is to figure out the disease which caused the outbreak by obtaining clues and hints while playing.

“We want to make our advertisement board flashy to try and convince people to try our breakout box when the day comes,” sophomore Laur Drumea said. “I like the amount of creativity coming from our group when it comes to ideas for the advertisement board.”

Requirements for the backstory of a breakout box are a patient zero, or the first person infected with the disease, and that the disease which caused the outbreak must be a real world one.

“My group is making ours based around a Las Vegas that was destroyed by nuclear weapons by the government after an unknown disease caused a zombie outbreak,” sophomore Fabian Kalandos said. “Over the course of the breakout box, the participants will travel to a hypothetical hospital and zoo to find the origin of the outbreak.”

The project serves to give students an environment in which they can independently research how diseases work and create a story to go along with their breakout box. At the end of the project, students will play each other’s escape rooms for the duration of the period.

“I’m really enjoying the project so far, it’s nice being able to work at my own pace for once instead of feeling rushed,” Drumea said. “Seeing every group creatively express their ideas and have fun in creating an escape room is a good change of pace compared to the normal monotony of school.”