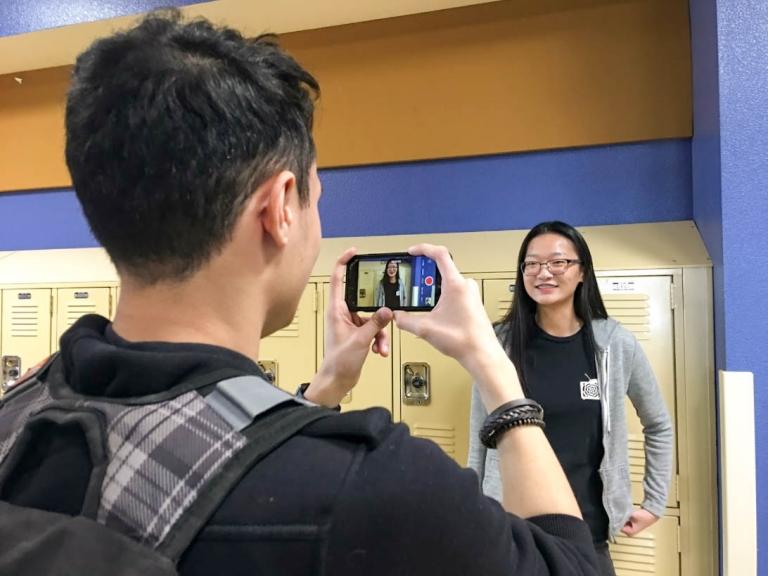 While working on their political party advertisement, senior Noah Lopez films Angela Chen for their video. The purpose of the project was for students to be able to use this experience to help them politically in the future. “We didn’t have many restrictions to what we could come up with, so we were able to collaborate to make something that can help us in the future,” Chen said. Photo credit: Vinh Tran

After completing a unit on the Democratic-Republican political parties, students in Mr. Joseph Juliano’s Government class are creating their own parties along with a political campaign advertisement.

“By understanding the process of how political parties gain support and paying attention to the specific issues, it will help decide who you would vote for and the overall influence parties have on your opinions to get votes,” Juliano said.

Each group is responsible for making a political party that can attract the most supporters. Rather than presenting their advertisement, students will watch their videos during class.

“So far our group has started to think of ideas for an ad in order to pursue others to join our political party,” senior Joelle-Lynn Vales said. “We wanted to spread social awareness of those who have special privileges and unfair trials.”

Some students have an emotional connection towards the issues that their political party is aiming to solve. Senior Darmi Effo feels that her political party mirrors the personal views of her group.

“My group researched about issues that we care deeply about and have a connection to.,” Effo said. “I feel strongly about gender and racial inequality and I think our group is voicing their struggles.”

Senior Brenda Chiang hopes that this project will help her with the voting in the future and with deciding which political party she aligns with.

“When we start voting in 2020 we can reference back to this project and think about what we focused on, whether it be education, gender, security or whatever we picked for our videos,” Chiang said.