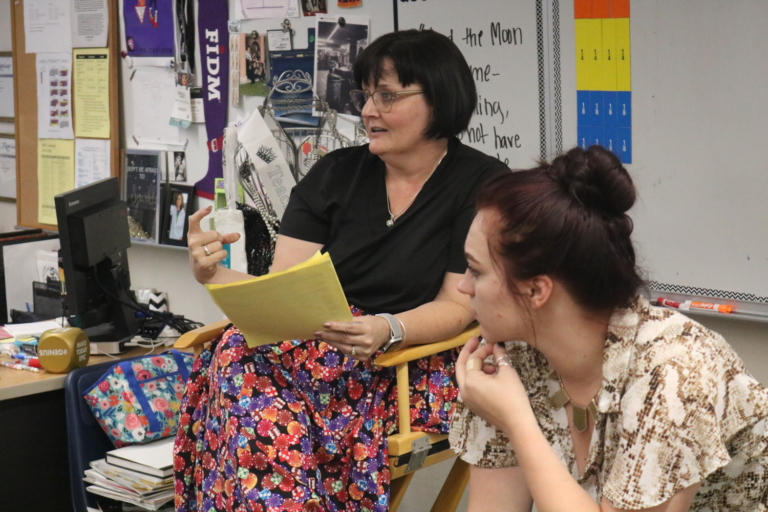 Discussing their alternative to the senior capstone, Interior Design teacher Shannon Sheldon and Fashion Design teacher Nicole Carlson host a meeting for the FIDM Fashion club. The cancellation of capstones were one of the consequences the school faced as a result of the budget cuts. “I know two parents that were furious and said they were terribly upset their students weren’t going to have a fourth year fashion experience,” Carlson said. Photo Credit: Ahmed Ahmed

While everything seemed normal as students entered their classes on the first day of school, the reality was that a bitter fight over the budget has resulted in major changes to the way the school will be operated.

After facing a $17 million dollar deficit for the new school year, Clark County Superintendent Jesus Jara decided to eliminate the deans position in all public schools. The decision was met with immediate scrutiny, with the Clark County Association of School Administrators filing a lawsuit claiming that the decision needed to be made with public input. After pressure from teachers and parents, Jara decided to back off the plan.

“The resounding message from all stakeholders including teachers, support professionals, our principals and our community — was that the decision was best left to our principals along with our school organizational teams,” Jara said. “I trust principals to be able to balance their budgets as they sit fit in their communities.”

While the decision was seen as a short-term win for the administration union, the schools would still have to figure out how they were going to adjust for the budget cuts. The administration made three substantial changes to the way the school is operated to accommodate, including the elimination of the dean, is the elimination of some advanced studies program area classes, where capstones were completed and increasing open periods for seniors.

Elimination of the dean

As a result of the district-wide budget cuts, Pate Thomas, who was promoted to the dean position in April, chose to apply for an assistant principal position at Shadow Ridge High School prior to the elimination of his current placement.

“[Thomas] was an integral part of our team,” assistant principal Trish Taylor said. “Our administration team is [worse off without him] because it puts the work that he was going to be doing onto the three of us that remain.”

Thomas’ departure means that there will be one less administrator to handle student discipline and monitor facility operations.

“[Thomas] leaving genuinely makes me feel a little worried,” sophomore Michelle Nguyen said. “As strict as he was, now there’s a smaller amount of people who will watch over the students.”

Due to his leaving, the current administrators will have to take on more responsibilities. These include disciplining students, monitoring the hallways, greeting students in the morning. Other administrators will now be in charge of facilities, as well as absorbing his portion of teacher supervision, which includes multiple classroom visits and a formal written observation at the conclusion of the year.

The final major change is the elimination of capstones, the end-of-year project for seniors in their program areas.

Seniors in the fashion program were especially upset about the decision, as their capstones was a fashion show they had been developing the skills to do since freshman year.

“I have always been passionate about fashion. The reason why I came to Southwest is due to the fact that I wanted to learn more about sewing and fashion construction,” senior Ghyanni Ferraer said said. “I am deeply frustrated and sad that I won’t have any of this available to me.”

In face of disappointment from their seniors, several program area teachers have come up with creative alternative projects. For example, the Nursing program seniors are participating in a pharmacy technician certification program, the Automative seniors will complete a smaller scale project, and the Fashion Design and Interior Design seniors can partake in a fashion competition sponsored by FCCLA.

“We’re trying to offer what capstone would have been if it was a fashion class,” Fashion Design teacher Nicole Carlson said. “Except for we’re now sponsoring it by FCCLA and the Fashion Club so that kids can compete, they still get the knowledge and there are scholarship opportunities involved.”

Other program areas will continue with a senior level class. Seniors that did not have a freshman program specific class, like web design, will still complete their third year to complete their area of study.

“My seniors never got [a fourth year,] [fashion seniors] were always ahead of us to begin with,” Web Design teacher Denise Snow said. “It’s totally fair because it’s what we’ve had all along. It’s limiting something that they had extra that they weren’t aware of.”

Increase in open periods among seniors

The third of the three big changes the administration made was an increase to the amount of open periods that seniors are allowed to have.

“Seniors have a lot to do with college applications and scholarship applications,” Hare said. “They’ve got plenty of credits to graduate already, elective-wise. I like the idea of giving them more freedom and more time to concentrate on the post-secondary end.”

Seniors will now have up to four extra open periods. Previously, the maximum for seniors was two.

“I absolutely love the open periods,” senior Jennifer Shelley said. “They really help me, specifically with my work schedule and still being able to balance friends and school, as well as getting enough sleep and working late.”

Despite the large changes that students and staff will have to accommodate too, Principal Donna Levy offered an optimistic view of how the school will handle future fights over the budget.

“We’re just gonna do the best with what we have,” Levy said. “We always do, Southwest always rises to the top no matter how much they cut us. I hope they don’t cut us anymore. I’m working with the people above me to say we just can’t afford one more budget cut, we’re really in a predicament right now.”