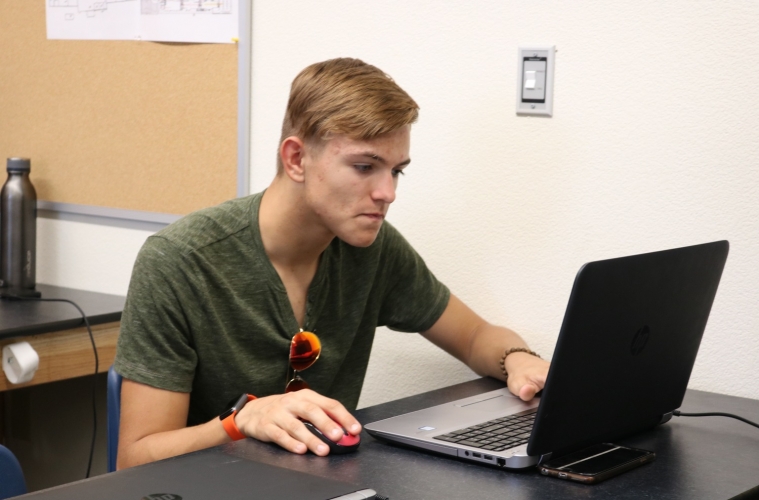 Waiting for Windows to download, senior Keegan Hall prepares to see how if his computer works properly. Seniors in engineering created computers from scratch. “It’s honestly pretty fun to actually build a computer,” Hall said. “We’ve worked with premade computers, but we’ve never had to construct it ourselves.” Photo Credit: Grinesa Bajrami

To continue expanding their knowledge on computer engineering, seniors in Cybersecurity III are building computers from scratch.

“For my Cybersecurity III class, I wanted them to have a refresher and be reminded of what they’ve learned,” Cybersecurity teacher Wayne Davies said. “They worked with computers their [sophomore year], but now this is when they learn everything computer related. My goal was for them to become more well rounded with everything.”

While working in groups of two, students were given parts, such as the motherboard, they needed  to insert them into the case.

“When it came to building our computers, the hardest part was getting some of the really small connectors onto the motherboard,” senior Samer Youssouf said. “Besides that I enjoyed getting the chance to build a computer from scratch since it’s something that I’ve always wanted to do.”

After building the computers, students downloaded the standard Windows 10 optical disk as their operating system.

“My partner downloaded the Windows ISO, so I spent the whole class looking at his computer waiting for it to finish,” senior Ray Comahig. “At the end of class, the download process never finished so it was really boring because we didn’t even get to use anything.”

Once they’ve finished building and preparing their computers, students will then create a class network, digital telecommunications which allows nodes to share resources,  to understand safety on the web.

“We have a lot planned for the rest of the year,” Davies said. “They’ll actually get to do what they’ve learned and learn hacking and safety. Since they’re making their own network, they don’t have to worry about outside issues since it’s a smaller network for the class.”