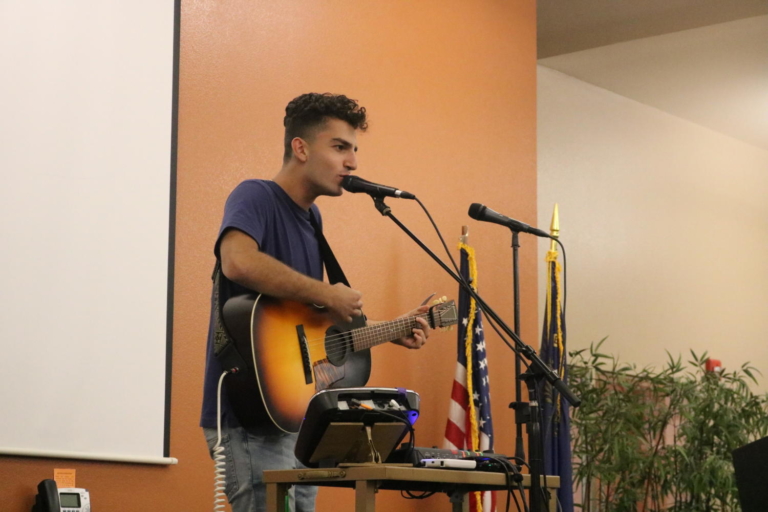 Singing one of his original songs, singer Ray Goren comes for a live performance. During 7th period, students watched Goren’s live one-man performance in the ballroom. “My father bought this guitar for my birthday and I’ve been playing the guitar since I was eight and a half,” Goren said. Photo Credit: Grinesa Bajrami

Showcasing his self-written music, singer Ray Goren performed four original songs and held a Q&A with students in the ballroom during 7th period.

“My biggest inspiration for music has got to be relationships and life, so anything that happens to me is inspirational,” Goren said. “Whether it’s a song like ‘Family Visits’ where I had family drama, I wrote something about that. ‘Traffic’ is just a stereotypical love song. ‘Space’ is a stereotypical break up song. Anything in life can be used and translated into a song.”

About 100 students from Mrs. Miriya Julian, Mr. Terry Lively and Mr. Mathew LaPorte’s classes attended the event, after a music promoter from MOXIE inquired if the school was interested in hosting an event.

“I didn’t know who we were going to see; however, I was very intrigued by the way Ray created his music so simplistically,” junior Kaery Martinez-Marin said. “After the performance, I looked at some of his other songs and I enjoyed them. Overall, the experience allowed me to see the type of music that can be created with mixers.”

Students spent 30 minutes on the Q&A and were allowed to meet Goren afterwards.

“I had a blast at the performance,” junior Sirre Taal said. “I enjoyed Ray’s whole vibe and thought he was a really good singer. It’s interesting to see someone young working in the music industry because it shows that teens can make it in the industry. It was a good eye opener in life and the real world.”

Goren performed four original songs Space, Traffic, Family Visits, Graduation and brief covers of Redbone by Childish Gambino. His other originals can be found on Spotify and Soundcloud.

“Hopefully, one day I will be playing in stadiums and winning Grammys–that’s the dream,” Goren said. “I am a happy singer-songwriter with a little more to [me] than just playing acoustic guitar.”