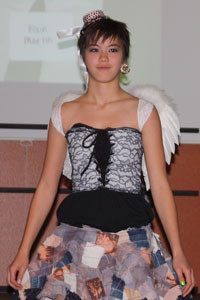 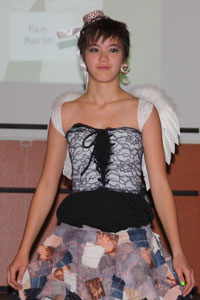 “Since the theme of the competition was ‘Recycle/Reuse’, we got a bag with four pieces of clothing and had to use at least 51% of what we were given,” said Galvez. “And we could only spend five dollars on extras.”

The judges scored the outfits on how much it changed from its original to final form.

On Saturday, April 10, Galvez, Swerling, and Martin competed against other city finalists at the Fashion Show Mall Runway. However, only Galvez left the competition victorious, winning third place in the Recycle/Reuse category.

“The winners of the final fashion show are supposed to have their outfits auctioned off so the money can be donated to charity,” says sophomore and designer Emily Almaguer. “They’re also supposed to get $200 worth of sewing stuff and a sewing machine.”