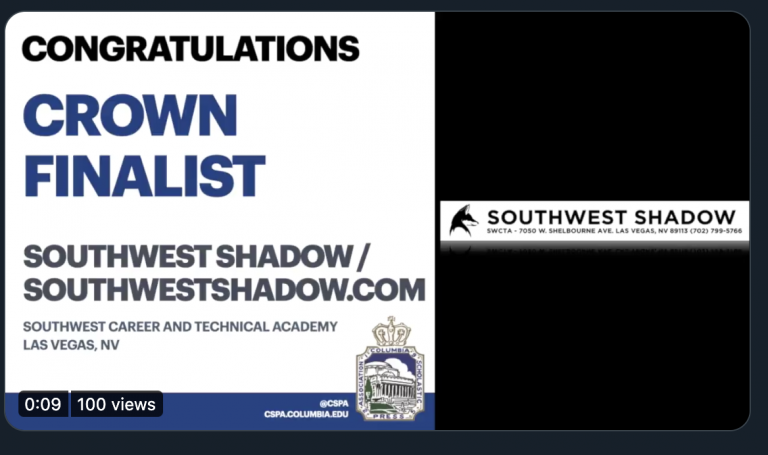 "I wasn’t too surprised [we were a finalist] because we have such dedicated, hard workers that work so well with one another," A&E editor Naila Yazdani said. "I’m so happy for all the new staff members to experience an accomplishment like this and for us editors who [have tried our best] to get all our deadlines in and help out any members we can. I’m genuinely excited to see what’s next for the Southwest Shadow."

Earning recognition for their hard work spent producing content for the student body, the newspaper staff has been made a finalist for the Columbia Scholastic Press Association Crown.

“It’s me and Julia’s first year as editor-in-chief and although it’s been difficult I’m so happy that the staffs hard work and with the help of the editors, we are a finalist for the crown,” co-editor-in-chief Gurleen Swaich said. “It’s exciting to be counted as a finalist for something so important and I’m hoping for the best.”

The Southwest Shadow has been awarded the CSPA Crown for eight consecutive years, with one more year added to the list.

“As an editor it’s really rewarding to see all our hard work being recognized,” Multimedia editor Juliana Borruso said. “I was kind of nervous before the results came out because we have almost like a legacy to uphold, since we’ve won it every year since 2012. Especially since it’s our first year as editors and on top of school being online, it was a little more difficult to get accustomed to the editing process, as well as to train all the new kids. Because of that, I am really glad that they got to see what hard work gets them, and that we succeeded at getting our staff up to par.”