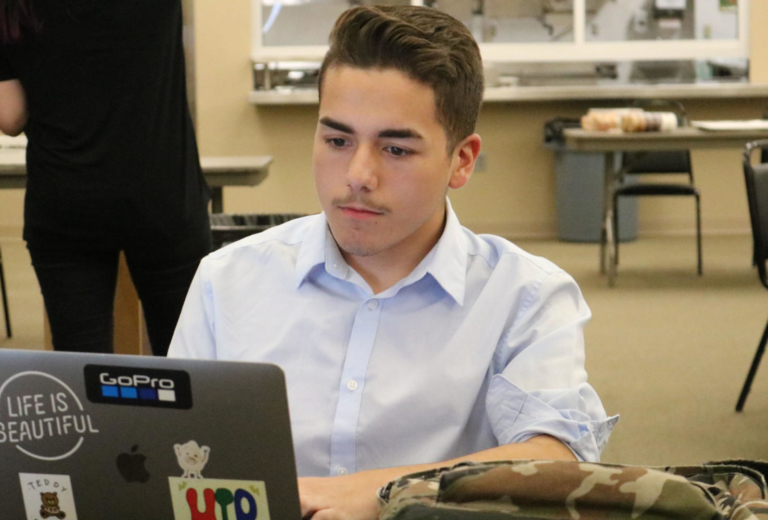 Practicing his debate, junior Ignacio Parra Parra prepares for the first round. Students wrote new speeches and debates for the new tournaments. “Debating seems easy in the classroom with friends, but actually debating is a complete other story,” Parra said. Photo Credit: Grinesa Bajrami

As their first inaugural season comes to an end, Speech and Debate members are finishing their novice season before transitioning into junior varsity and varsity after their last tournament at Rancho High School on Dec. 7 and 8.

“The speech and debate season thus far has been fantastic and productive,” Speech and Debate adviser Henry Castillo said. “We have seen many students in their first year of competition succeed and excel.  At least one member has placed at each competition, which is amazing since this is our first year.”

“After winning first place in the last tournament I participated in, I have gained self-confidence and I am certain I will break again this time,” Ahmed said. “I am now certain that I am a strong competitor and I am prepared to win this debate, as well. It was all a learning process.”

“I am prepared to enter the junior varsity category in spring because it should be relatively easy since I’ll be debating the same people from the novice category,” Shelley said. “I found out I can compete in varsity my senior year and I’m excited to compete. I know people in [the] varsity public forum [category], so I am most excited to debate people I used to be close to.”

To maintain their status in Speech and Debate, members must participate in the fall and spring semesters or they will be permanently removed from the club. After this fall semester, members will only compete in junior varsity and varsity levels, where they will have approximately five competitions per season.

“[As my first year as adviser] I have learned that I need to place a lot more responsibility and trust into my captains and board members because I can’t do everything,” Castillo said. “That’s one thing I’ve learned is that because then I focus on quantity over quality with my team members. I need put a lot of training into my students so they can help other students.”