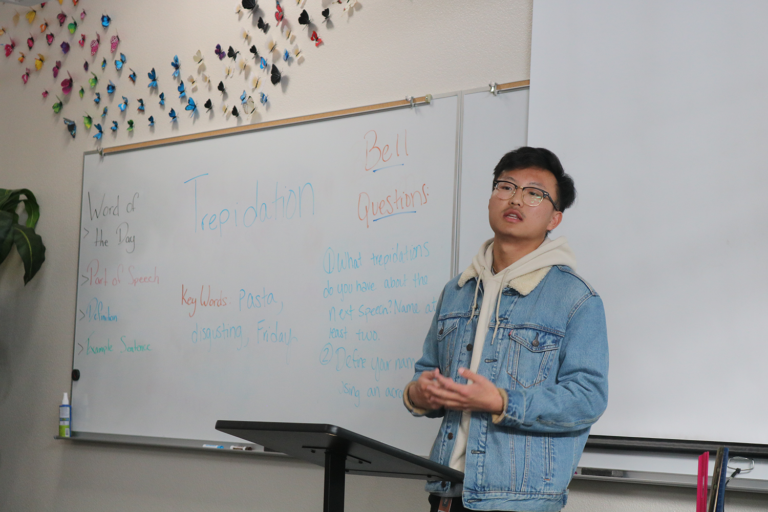 Practicing his speech, sophomore George Luo presents to the entire club. Students were allowed to practice in front of others and were given feedback. “I wanted to get my point across [and] inform the club about my speech being [on] education reform,” Luo said. Photo Credit: Grinesa Bajrami

In efforts to conclude the year-long season on a high note, the Speech and Debate team has started preparing for their state competition at Coronado High School from starting March 7 until March 9.

“My advice for students is for them to remember why they joined this club and why the chose that event in the first place and apply that motivation to each round they compete in,” Speech and Debate Coach Henry Castillo said. “In the end, I want them motivated and even if they don’t win I want my students to just have fun and do their best.”

In most competitions, participants are given the option to be in junior varsity, which is dependent on their skills. However due to the high stakes of state, students will only be allowed to compete in varsity to judge all competitors equally.

“I’m competing at state because it’s a good opportunity to learn from competitors and work on my ability to think on the spot,” senior Magdalene Macandog said. “It’s also my only chance at competing at state, so it’s now or never.”

Only two groups per category are allowed to compete. Participants were chosen by Castillo based on how they performed and placed in previous tournaments.

“My partner and I chose to compete at state because speech and debate is so thrilling and exciting,” junior Alexis Cline said. “State is a great opportunity for my partner and I to meet new people and have some really interesting debates. The more my partner and I compete, the more we keep going.”

After state, students will have the option to compete at National Qualifiers to decide who is eligible to compete in nationals at Dallas, Texas. Five members per category are allowed to compete at that competition and will be also be selected by Castillo.

“This season went great, since students competed, bonded and grew, which was my personal goal as a coach,” Castillo said. “This season could have gone better by offering students, specifically my officers, more responsibility than I had originally given. I should’ve allowed them to grow, not only competitively, but also professionally as the leaders of the team.”