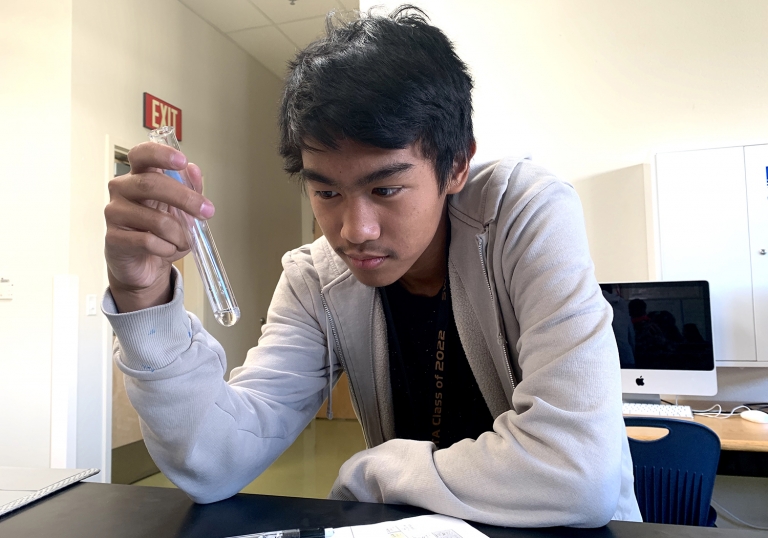 Trying to figure out what to do next, sophomore Jordan Lopez measures the different test tubes. Students in chemistry classes together to work on a lab based on hydrogen peroxide. “This lab taught me how different amounts of atoms can cause different reactions,” Lopez said. “The reactions that took place were satisfying to watch and I enjoyed it.” Photo Credit: Gurleen Swaich

Using as oxygen as the prime suspect in their ‘murder case,’ students in Jennifer Conders’ chemistry classes are creating reactions using hydrogen peroxide.

“We are comparing water and hydrogen peroxide to see how one extra oxygen can affect reactivity,” Conder said. “This will help students determine why carbon monoxide is poisonous and I wanted a more exciting way to teach the next concept which will help them to solve the cases.”

Students will solved the ‘murder case’ by using previous knowledge regarding oxygen and chemicals to understand the potential harm of carbon monoxide.

“The chemistry lab helped me understand everything we went over because we were actually interacting with chemicals and this helped build on what I already knew,” sophomore Ralph Quinto said. “This lab went along with our murder case and it helped me in understanding how carbon monoxide is poisonous and helped provide evidence to support that idea.”

“I genuinely liked this trial because it’s interactive and it allows us to learn hands-on with hydrogen peroxide and water about bonding,” sophomore Brinn Harms said. “I feel like this will help me more in chemistry because I am a visual learner and this allowed me to see the concept and understand it better than I would have if we just read.”

By using a different method of teaching, students could learn about the potential toxicity of oxygen. They could then use this information analyze the ‘murder case’ more in-depth.

“I am hoping to teach students lab skills and problem solving skills so they can brainstorm together to solve the case,” Conder said. “I expect students to be able to understand how to see the difference of how hydrogen peroxide and water react so that they can predict why carbon dioxide and carbon monoxide react differently.”