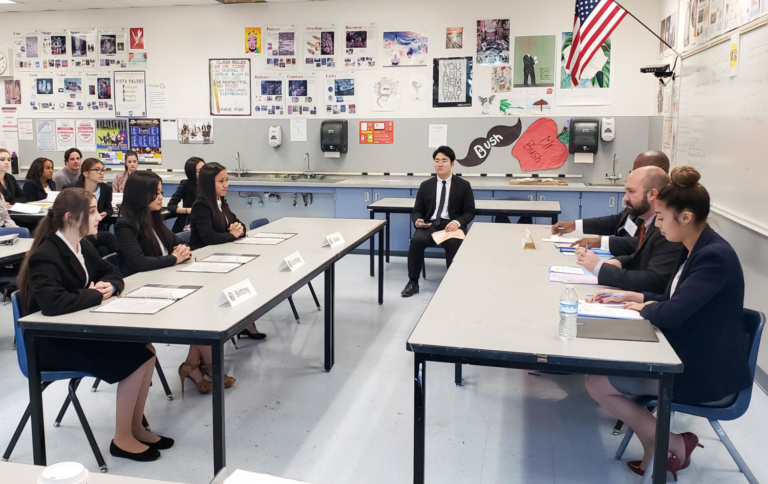 Listening closely to the judges, seniors Brittny Mikhaiel and Lindsay Lopez answer the question given to her. The team had to perform a perfected speech of their assigned topic on Feb. 2, 2019. "I felt really good after district," Lopez said. "We luckily had amazing judges and interacted with us and gave us good feedback to be better for state." Photo Credit: Matthew LaPorte

“I obviously want my students to win and make it to nationals,” Government teacher Joseph Juliano said. “I’ve been preparing them all year and they’ve been working extremely hard, so I have high hopes.”

‘We the People’ is a government program, where students study the U.S. Constitution and how it has evolved through the years. During the competition, students will be asked to share their prepared responses, as well as respond to on-demand questions.

“I actually feel confident in my unit, we are putting in some good work and we all know our stuff,” senior Ethan Wood said. “However, we are still a tad bit worried when it comes to the follow up questions since we don’t know what they’re going to be. I feel like we have a good amount of knowledge to get us through the competition.”

This is the first time the competition will be held at UNLV. Also, certain categories have been combined, so there are less competitors.

“I love politics, I debate public policy for fun with friends all the time,” senior Anish Chejerla said. “I believe as a citizen, it’s my civic duty to be properly educated as much as possible before I cast my vote next election.”

For the last two years, Juliano’s students have gone to the state competition in Reno. Last year the team placed third and the year before they placed second.

“Personally, my goal is for my students to grasp the idea of government through ‘We the People,’” Juliano said. “They can each learn more in depth because they’re trying to remember everything for a speech, so the information will last longer.”