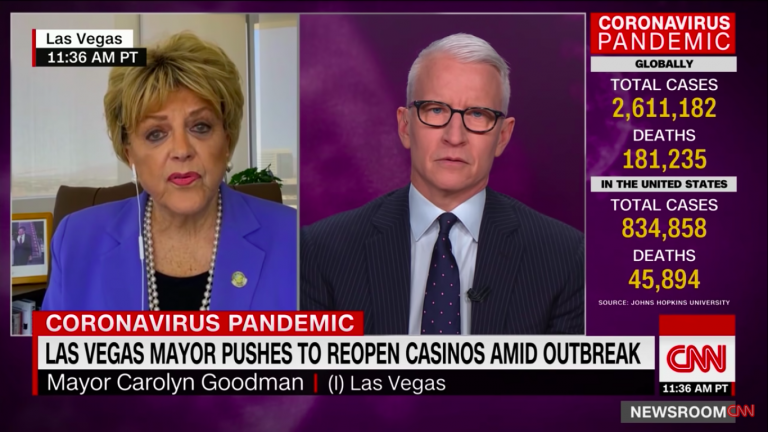 While governors and mayors across the country are making difficult choices to protect their constituents from becoming infected and dying from the coronavirus, Las Vegas Mayor Carolyn Goodman appears to have a different goal—humiliating her city to the nation. First, by decrying social distancing requirements the state of Nevada has adopted as “insanity,” and then, by doing multiple TV interviews in which she downplayed the severity of COVID-19, including with Anderson Cooper.

In her interview with Cooper, the Las Vegas mayor seemed to conflate COVID-19 with much less infectious and deadly diseases, with remarks like “…this isn’t China,” implying that China’s susceptibility to the virus was something unique to the Chinese population, that wouldn’t be replicated in Sin City, and that “only” 150 people died from the virus in Southern Nevada.

Goodman’s belief seems to be shared by the outpouring of protesters demanding their governors lift their stay-at-home orders, from Michigan to Kentucky. As the economy continues to spiral towards a depression, a vocal minority of the American people appear to believe that policies to mitigate the spread of COVID-19 are counterproductive. The only problem is that they—and Mayor Goodman—are wrong.

The idea that we end social distancing now lies in direct contradiction with actual public health experts, who insist that continuing shutdowns of places like The Strip is necessary to slow the spread of the virus. Metropolitan areas like New York City have already succeeded in “flattening the curve” with this practice, so re-opening the city and putting countless people at risk is more than short-sighted—it’s dangerous. It’s so dangerous, in fact, that when Mayor Goodman actually went on CNN to defend her position, she embarrassed herself and implied that our city should become a “control group” for the country, essentially killing thousands of people for no discernible reason.


When pressed on how it would actually be feasible for casinos to manage to socially distance following re-opening, Goodman ignored the line of questioning, arguing that it would be the casino owners’ responsibilities to figure this out. This is a roundabout way of saying that if casino owners aren’t concerned with the well-being of their patrons and employees, you shouldn’t look to Goodman for any help. It’s more important that Nevada’s wealthiest residents not lose a few pennies than it is that Las Vegas mothers and fathers are safe.

Goodman’s comments were rightfully repudiated by politicians and political commentators, but unfortunately, her preferred policies are already being implemented in a few places. States like South Carolina and Georgia, that are allowing businesses to re-open, are essentially subjecting their populations to a second-wave of COVID-19 cases without the adequate health infrastructure in place to respond. Las Vegas taking the same path would be a death sentence.

With that being said, it can be hard to imagine exactly when the most appropriate time to end social distancing is. Ezra Klein of Vox details four separate major plans for re-opening the economy, and all of them require a massive shift in the lives of common Americans. In essence, until there’s an enormous—almost universal—level of testing, any transition to re-opening the economy is inevitably going to lead to an explosion of cases.

In fact, that’s an explosion of cases that’s likely to harm the economy larger than continued social distancing—80% of economists on the IGM panel agree that loosening restrictions, which may cause a resurgence in COVID-19 cases, would likely do more damage to the economy. In the words of Stanford economist Robert Hall who was on that panel, “If lockdowns were a good idea, keeping them is probably also a good idea.”

Believe me when I say I know how harmful the lockdown’s been. Both of my parents have lost their jobs, and many of my friends are in similar situations. A wave of isolation is crashing down on a generation already suffering from depression and loneliness, and it can be frightening not knowing when this is going to end. However, Mayor Goodman’s argument that we should re-open businesses now simply flies in the face of all actual evidence. Instead of recklessly allowing non-essential businesses to re-open, Nevada should take steps to further financially support individuals and small businesses hurt by closures.

While Goodman’s provocative comments are sure to attract a lot of press, the actual experts concerned with public health are those that we should be listening to. Doing so may not completely end the spread of the virus, but it will certainly be more effective than following the advice of politicians advocating for an end to closures. In fact, it’d be accurate to say that the only “insanity” in this scenario is coming from Goodman.