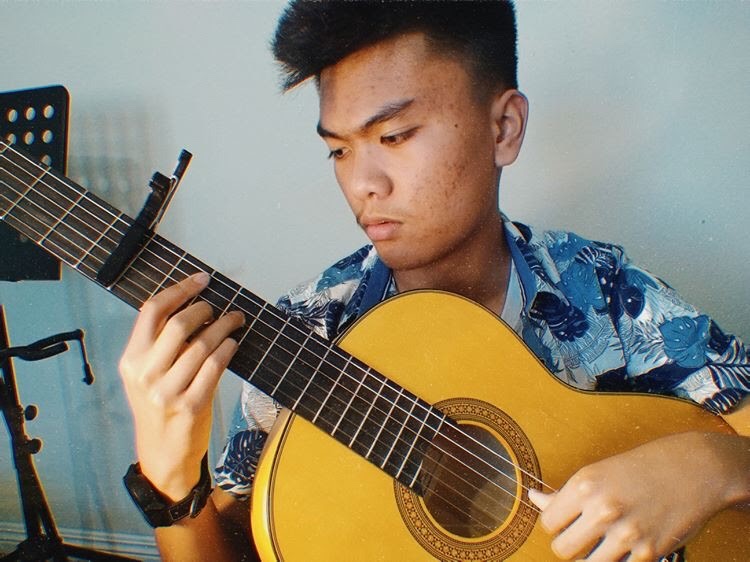 After a long and tiring day at school, most students usually sleep or play video games; however sophomore Louis Santiago Fernandez picks up his guitar and starts strumming the strings to the beat of his desire in a sweet, yet sombre, melody.

“When I was beginning to get into music, I was determined to learn,” he said. “I practiced for hours on end without rest. After school, I would pick up my guitar and practice a piece, or maybe sit down at my piano and start playing Mozart or Beethoven. There were times when I wanted to quit, like when school started back up and homework began piling up, but I couldn’t just stop [my passion]. I was going to see it through to the end.”

With the support of his family, Fernandez began playing the guitar at six, piano at seven, and violin at eleven. Taking lessons from his parents, both of whom are professionally-taught guitarists and pianists, is like taking Gordon Ramsay’s MasterClass for Fernandez.

“It’s definitely challenging,” he said. “I have to practice for hours while they watch me. If I make any mistakes on the tone or play the wrong note, they point it out. It gets annoying sometimes, but it helps me get better.”

Coming from a family of musicians, the allure of music has always been in Fernandez’s heart.

“My love of music came from my family,” Fernandez said. “My grandparents were musicians and my parents were talented enough to enroll in the University of Santo Tomas Conservatory of Music in the Philippines. I grew up around musicians and was pushed by my family to play, so I just naturally fell in love [with music].”

This love of music eventually evolved for Fernandez when he decided to join a talent show competition in his elementary school.

“I got onstage and sang Frank Sinatra’s ‘Fly Me To The Moon’,” he said. “I was terrified. I never performed for anyone else except for my parents, let alone a whole audience. I had a fear of performing for crowds. But when I finished the final verse, they cheered. I knew then that this fear I had was what pushed me to perform onstage, so I embraced it.”

Even though Fernandez did not win, it was a great stepping stone for him.

Countless nights of learning and practicing have been tough, but Fernandez believes it brings him closer to his goal of mastering the guitar and piano.

“I want to learn as many instruments as I can so I can understand music from other cultures,” Fernandez said. “Different cultures have different sets of instruments and I want to be able to learn each of them.”

The hardest part of practicing comes from the lack of time. And with the pressure of school crashing down on him too, Fernandez takes days off to focus on his school work.

“I have to juggle between school and my passion for music,” he said. “I want to focus on one, but I can’t because the other will slip.”

With the ongoing pandemic, Fernandez has had time to himself to rest and reflect on his journey so far.

“When I take days to myself, I feel relieved,” he said. “I used to overwork myself all of the time, trying to practice and do homework simultaneously, but I just couldn’t take it. So I decided to have off days so I can relax, although I would’ve liked to be able to do everything at once.”

Fernandez advises students who are interested in learning an instrument to give it a try.