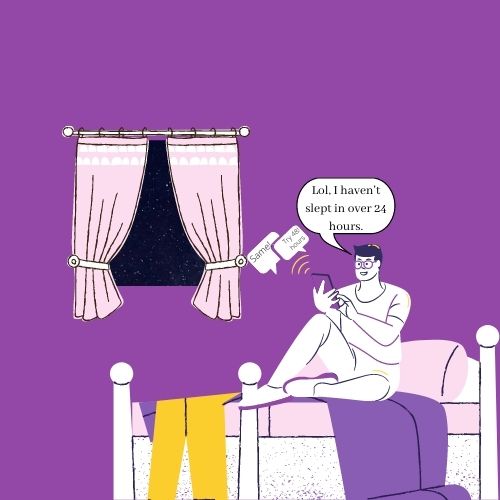 Maintaining optimal health by obtaining ample sleep, moderating caffeine, keeping a positive attitude and more is a crucial part of living a healthy life. Yet, the media has put an emphasis on bad habits that can have detrimental effects on one’s well being. What started off as simple self-deprecation jokes has now led to destructive behaviors becoming the new trend. Art Credit: Monserrat Mendieta

Staying awake way past the ideal bedtime, ingesting more coffee than a normal person, perhaps joking too much about one’s insecurities – all of these are activities commonly posted about on the internet by people bragging about their unhealthy habits. Unfortunately, many teenagers do not see the consequences of their actions as they mask the seriousness of their neglected health with “lol” and “crackhead energy” captions. Social media has taken these unhealthy behaviors and has made them out to be “quirky” as opposed to what they really are: self-destructive.

In recent years, what has been the most prominent trend on social media is having an appearance or demeanor that is “relatable,” meaning that the average person can connect and sympathize with you. Many YouTubers, such as Emma Chamberlain, emulate this “relatable” aesthetic by staying up late, eating junk food, and visiting Starbucks frequently. In moderation, all of these behaviors can be integrated into a healthy lifestyle, but in order to match these social media stars and be “relatable,” many adolescents post and celebrate poor self-care practice through imitation.

Social media has played a large part in glorifying and showing off any unhealthy habits a person does, but what makes it so harmful is that teenagers are beginning to think it is normal. Instead of trying to correct their sleep schedule or cut down on unhealthy foods and take steps to better themselves, they continue to risk their wellbeing.  For instance, there has been a concerning series of videos where teen YouTubers, such as Kelly Michalita, post videos of themselves pulling all-nighters on school nights. If they manage to make it through a certain period of time without sleeping, they view it as an achievement. Yet, little do they know, sleep deprivation can cause memory issues, a weaker immune system, weight gain, a higher risk for heart disease, and other health risks.

The romanticization of problematic behaviors not only affects the physical health of teens, but it has led to intense self-deprecating jokes where users often bully themselves resulting in damaging their self-esteem. What started off as light humor at one’s own expense is now genuinely affecting the way adolescents, who make these jokes, perceive themselves. In fact, many have developed a reflex to degrade themselves which will only increase the negative feelings they may harbor. Research has shown that self-talk plays a significant role in the way one feels about the world and themselves. In all, although these tiny habits may not seem like a notable concern, they can severely damage someone’s health.

Also, there has been a disturbing trend in which adolescents self-diagnose themselves with mental illness. For instance, on TikTok there are many posts where users claim that they have anxiety. They often talk about their stress-induced habits that are supposedly evidence that they have the illness (despite never visiting a health professional) in a completely inappropriate matter, such as through a remixed song or odd audio track playing in the background. Many feel that not having ideal mental health sets them apart from the group and makes them “special” in a way, which is simply not true. A perfect example is how many TikTokers claim that certain unique gestures mean that someone is mentally ill. This flawed view about mental ailments is only harming those who are really ill by giving them misinformation and conveying ignorance.

Not to mention, our teenage years is when we start building routines and practices that we will carry on to adulthood. This is what makes adolescence a crucial time to build up healthy habits that will prepare teenagers to be able to operate as functioning members of society. By glorifying bad habits, teens will continue behaving in ways that damage their health for potentially the rest of their life unless change is made.

IN MY EYES: Xavier Guzman

As a teenager myself, I know that there have been many times where I have put myself down to make my friends laugh or stayed up late because I felt that I would be virtually unaffected. However, as time has gone on, I’ve noticed that it’s been harder to compliment myself as the circles under my eyes have grown darker. In other words, sooner or later all of these little habits will catch up to anyone. Although social media seems to teach teenagers that eating chips extremely late, frequently feeling depressed, and just not caring for ourselves in general is just one big joke, at the end of the day, human lives are not something to be tampered with.

Instead of laughing and showing off bad habits, it’d be best to shift to posting about methods of self-care. There are many people who take pride in their skincare routine, manicures, fitness regimens, and other activities that are beneficial. Just like how negative habits can bring people down, positive habits can lead to a better quality of life. The activities that better one’s health and set up teenagers for success are what should be given the spotlight by the media.

In all, it is crucial to always do what is best for one’s health and wellness. Although slip-ups can occur, it is vital to stay on track. Social media may make unhealthy habits seem “relatable” or “quirky,” but the negative health effects that come with them are certainly not.