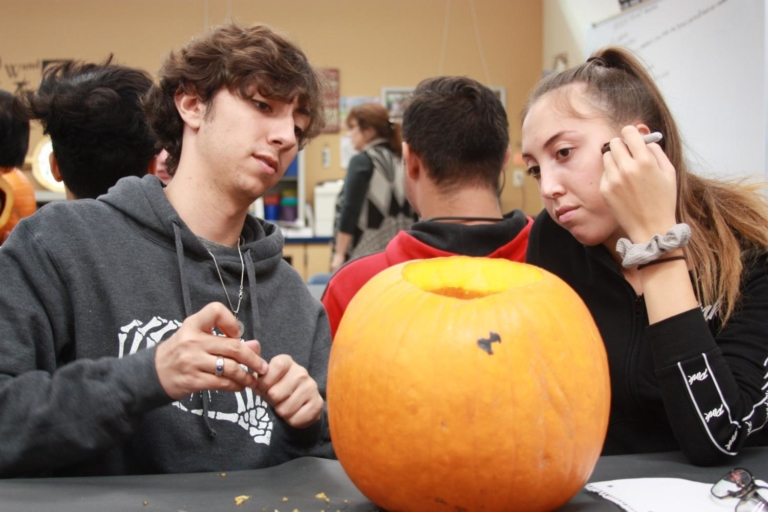 Carving a pumpkin, seniors Ethan Saxe and Elizabeth Bovil discuss their story analysis. Seniors in Cynthia Bailin’s English 12 Honors class illustrated Edgar Allen Poe poems onto pumpkins to create an artistic telling of the story. “After we read the story as a group, we discussed what we thought the story was about and its deeper meaning,” Saxe said. “Afterwards we came up with the analysis. Overall it only took us a class period to figure it out.” Photo Credit: Samantha Wilson

“I thought this would be a fun activity for students to do,” Bailin said. “In order to translate words to a visual representation, you have to think beyond just literal. This project was created to get them to think in a more abstract way.”

Students formed groups of five, then decided on a poem to do their project on. Two class periods were given to analyze the stories.

“Usually with other analysis’, we write essays,” senior Ethan Saxe said. “With this project, we get to work on something visually. I usually like visual learning compared to anything else because it feels more hands-on and it’s easier for me to learn from.”

Based off the story chosen, students were expected to display a symbol onto a pumpkin by painting, carving or with another form of art. The symbol would represent the overall theme of the poem.

“My group decided to analyze ‘The Black Cat’ which is about a man who killed his cat and took out it’s eye,” Saxe said. “The cat represents the main characters soul and all his guilt. It is our interpretation of what the cat would look like if it came back to life.”

Materials were brought in by students in order to properly display their idea. Short presentations will be held next class to allow students to explain their design. Pumpkins will be overlooked by Bailin for grading.

“The pumpkin carving was a cool add on to analyzing the story,” senior Anna Liang said. “We analyzed the story like normal but the pumpkin carving made the project fun as it gave the story a visual representation. It made it easier to analyze when we kept in mind that we had to find an overall symbol.”