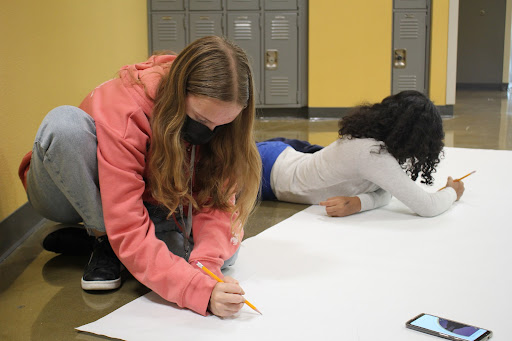 Working on designing posters, freshmen Brianna Scherschel and Isela Michael sketch out their ideas in pencil. Student Council has been working in committees to prepare for Homecoming on October 22 and 23. “I am really excited that we get to have [a homecoming] just in general,” Scherschel said. “The past year and a half, two years, we haven’t had anything, and this is our first big dance back. I’m really excited for not just the dance but everything that comes with it, like all the sports and the posters and spirit week and that sort of fun stuff." Photo Credit: Juliana Borruso

After two years, the biggest dance of the fall is back: homecoming.

Student Council has dealt with Covid-19 protocols, an obstacle that was not a problem in previous years. Because of this, the event will be split into three different dances: Dance A on October 22, and Dances B and C on October 23, with a 249 person maximum at each dance.

“I think the biggest challenge that we had was trying to get everyone to be able to go to homecoming but also keeping in mind that we are in a pandemic and there [are] restrictions that CCSD has for us that we have to follow,” Student Body President Elizabeth Ayanaw said. “I think people are a little confused that we’re having three dances and seeing other schools having only one, but [we’re] trying to make sure everybody’s safe and [restricting] the amount of people so nobody gets Covid.”

Homecoming Court has also changed, however not due to Covid-19. In efforts to make the Court more gender-neutral, positions such as “King” and “Queen” have been changed to just Royalty.

Homecoming Royalty winners will be announced on the morning announcements on Friday, October 22. At the dances, whichever winners are present will be crowned instead of being required to attend all three for a crowning.

“The excitement of being able to go to the dance in general after being in quarantine for almost two years, and not being able to go to a dance in two years is giving [students] a little energy,” Ayanaw said. “We’re trying to make everybody excited to go knowing that it will be inclusive and also letting everyone know that there will be three dances and more students can go.”

Students are also not allowed to bring people from outside schools, due to contact tracing. They also will receive digital tickets, with Student Council keeping track of everyone who bought online.

“[It was the] same thing with movie night, we can’t bring people to campus that [don’t go] here,” Bousema said. “If something were to happen or someone were to test positive, we want to make sure we know where it’s coming from, and we can’t really do that with people who aren’t a part of our school.”

The event will be held here on campus, in the quad, being the first ever homecoming dance with the venue at school.

“It’s nice that we even get a homecoming but I would have liked to have it somewhere else,” senior Franchesca Ramirez said. “There’s something a little weird about going to a school dance that’s literally at school, but I understand it’s because of Covid protocols. Even though it’s not a venue, even just the experience of homecoming is fun and I’m glad that we didn’t lose that aspect of our senior year.”

Student Council has been preparing for the dances throughout this week, given that Dances B and C are sold out.

“A lot of seniors and juniors are probably disappointed that it’s not at a venue that it’s normally at, but a lot of freshmen and sophomores are just happy that we have an event going on,” Professional Academy Vice President Claire Cuddihy said. “I think more people are excited about it than I would say not excited.”