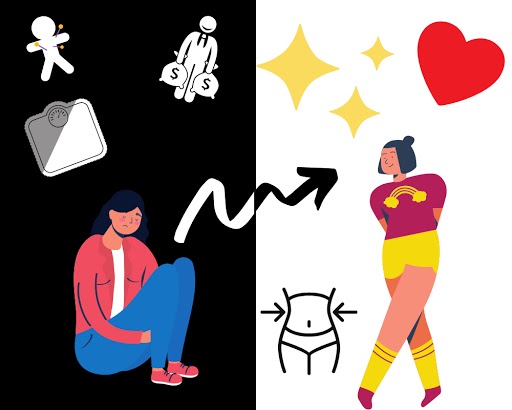 In this age where tons of teenagers seek to improve themselves, they feel pressured to take drastic measures in order to lose weight, have perfect skin, and all in all to achieve the perfect “glo-up”. Photo Credit: Montserrat Mendieta

When quarantine began, I’ll admit that I was guilty of upping my social media screen time;’m a teenager, sue me. While scrolling through Instagram I came across many posts under the hashtag #gloupchallenge. It was full of before-and-after photos of people who experienced a “glo-up.” Glo-ups, which are personal transformations that typically involve increased attractiveness and confidence, are a prominent part of today’s teen culture.

I was very impressed with how much someone could change for the better and I figured it would be a better use of my time if I took some initiative to better myself through a glo-up as well. As I began to search up different methods to work out, eat better, lose weight, and so on I noticed that the advertisements I received were from a bunch of apps that apparently came up with a suitable diet and fitness plan based on my weight. From what I could tell, I was encouraged to cut out entire food groups from my diet.

I know that I am not the only one going through this during quarantine. It has become increasingly popular to want to “glo-up.” Unfortunately, many companies use this as a way to sneak in a chance of profit sales from teenagers who seek to improve themselves.

Many shady companies advertise “cheap diets” and “fitness plans” with the promise that people who participate will have a “total makeover” or “glo-up,” but many times they are formulas for health disasters. Namely, participants completely mess up their metabolism or overwork their bodies. For example, one product that is a complete scam and promoted to the public are the “Slimquick RX8 weight-loss pills.” The packaging claims that you can lose up to 30 pounds but not only does it not provide any supporting evidence for that claim but it contains a potentially dangerous ingredient called “Yohimbe,” which is linked to irregular or rapid heart beats, kidney failure, and more. Not to mention, the capsules will last you approximately 20 days if you follow the instructions which means in the event that it does work, you’d lose 30 pounds in 20 days which is a very dangerous amount of weight to lose in such a short span of time. This is just one of thousands of flawed weight loss methods you can find online.

This is just one of the many unhealthy methods used to lure users in, and, in the end, these tasks end up doing more harm than good for participants.

Although some may argue that the public should know better, in most cases the public “does” know better. In fact, more than 83% of teenagers said they had exercised in order to try to lose weight which can be classified as a healthy method. On the other hand, 50% said they consumed more water and less food instead, in order to try and lose weight. Water is not a substitute for food, therefore to be prioritizing it over eating is a dangerous way to try and lose weight.

Additionally, statistics show that  50% of teen girls and 30% of teen boys are saying that they are using unhealthy weight control behaviors such as skipping meals, fasting, smoking cigarettes, vomiting, and taking laxatives. In short, the majority may be using healthy methods to “glo-up” but unless something is done to protect the 50% that are suffering, then these companies will continue their reign of terror.

Afterall, imagine being a 13-year old girl and your idol is trying to get you to use something that can make you extremely sick.

It also doesn’t help that a multitude of celebrities whom teenagers look up to have been paid to endorse unsafe products to their followers. For instance, Khloe Kardashian was caught promoting a meal replacement shake that was non-FDA approved and could encourage disordered eating. Her fans were outraged and rightfully so, as they felt the star should have done more research into the validity of the product before recommending it. Afterall, imagine being a 13-year old girl and your idol is trying to get you to use something that can make you extremely sick.

With all this in mind, I think it needs to be said that when going to the internet to find ways to “glo-up,” teens must be extremely careful. If it sounds too good to be true then, it probably is, and oftentimes we need to keep our best interests in mind and put our health first. It is easy to get caught up trying to look like the picture we see online or find our best self, but with a level-headed approach, you won’t ever need a glo-up.