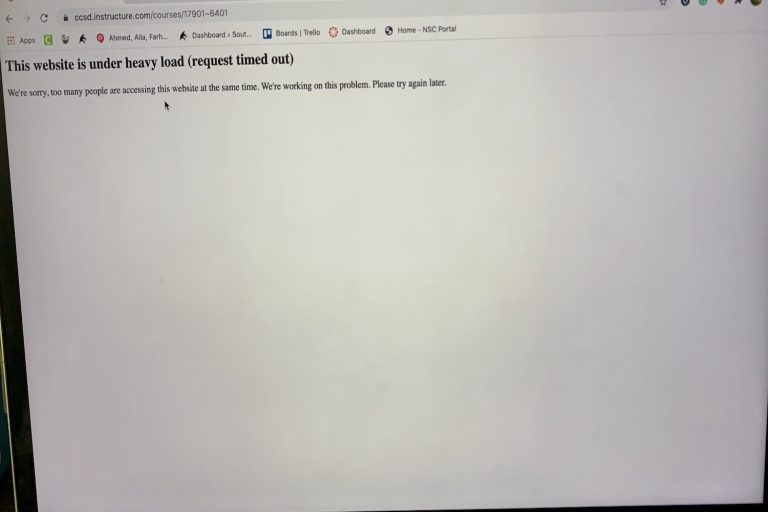 Due to a reported overload of the server, Canvas shut down for the majority of the morning. However, the issue slowly resolved by the end of the day and students as well as teachers were able to log in to start their first day. “My day went really similar to how I expected it to go since I have experience in Google Meet from last year when we had our calls to continue learning,” junior Ashley Mussio said. “I now definitely know what to expect next time and how to prevent any other issues, such as making sure my mic works because it did not during my first-period class, as well as checking to make sure the internet connection is secure.”

With uncertainty hanging in the air since March 16, students, teachers, parents and administration alike wondered what would happen when 320,000 students logged on for the first day of class.

On August 24, the question was answered when the day started with the servers hosting Canvas and Infinite Campus grew overloaded during first period.

“It was really frustrating having to continuously wait for my screen to load,” junior Tyson Tabura said. “My teachers understood that it would happen and they were prepared to guide us through it and told us what to do.”

The problem lasted for most of first and third period. However, after the fifteen-minute nutrition break following the second period of the day, the issues began to clear up and teachers were able to continue with their original lesson plans.

“As a public speaking instructor, the first day being on a digital platform was odd and will continue to be unique in how we have to implement our teaching practices and lesson plans,” Public Speaking and English 11 teacher Henry Castillo said. “But I found it to be a wonderful opportunity to reflect on my first-day practices because normally I would do the same icebreaker I’ve always done. But, I decided to change that and so it was different [and]interesting, but fortunately, it was smooth so I can’t complain.”

In order to make students comfortable and have everything run smoothly, teachers such as P.E. Coach Rosalie Schmitt have used the last two and a half weeks to prepare and train themselves on Canvas and other software.

“I didn’t face complications because I spent a lot of time with Ms. Snow and she helped me so much and showed me how to do the Google Meet as well as how to make sure it was up and running properly,” Schmitt said. “It actually went a lot smoother than I thought it would. The Google Meets started at the time they were supposed to and the kids seemed to mostly have a grasp of what was going on and what to do. And, everybody has been showing up which is so amazing because I thought there were going to be a lot of no shows and there were not.”

By the end of the school day most teachers were surprised by how minimal the complications were.

“I think I did ok just because my expectations for that first day were pretty concrete,” English 10 teacher Cathy Sabol said. “We got a letter from Dr. Jesus Jara about being optimistic and trying our best through this distance learning. [The students] just needed to answer a discussion question so it wasn’t extremely stressful, and if they weren’t online it was short enough to make up. [But] being smoother at Google Meets and presenting and all of that, I could definitely be better at.”

With the fate of the second semester still undecided, some students are hoping to return to an in-person learning experience soon.

“I am still adjusting to this new way of learning and trying to get the best experience [possible],” freshman Sceian Santos said. “So far, I have learned that technology can be really tough at times and that we have to communicate with each other in order to help. Next semester, I am hoping we’ll be able to go back to school in real life and hope to meet new friends.”