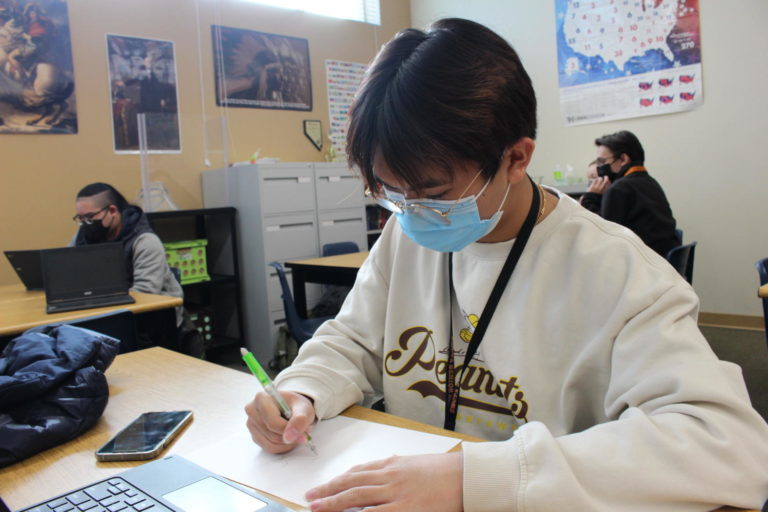 Working on his political cartoon, junior Anthony Pham expresses his ideas and opinions on the War of 1812. Students in APUSH had to create cartoons for their peers to view and interpret. “I’m excited to be able to represent and analyze political cartoons,” junior Anthony Pham said. “It's important to know how to make them since we should know the history and the process behind them.” Photo Credit: Ashley Harris

In order to showcase the main events and differing opinions from the War of 1812, students in AP United States History created political cartoons.

“We’re doing this political cartoon activity because in US history a lot of them will come up in what we’re studying,” Social Studies teacher Joseph Juliano said. “We’ll create our own cartoons as a way to learn how to analyze others as we see them in history. It’ll add an artistic and visual component to students that like to see things.”

This is a change of pace for APUSH classes, as students put their ideas into an illustration instead of a written, essay-formatted, assignment.

“I’m excited to be making this cartoon since I like making creative things,” junior Jake Windon said. “It’s a good way to express our ideas on the war, and it’s different from our other assignments. Most of them are written documents, and this is the first time we’ve done an illustration of something.”

Cartoons were showcased by Juliano to his classes for students to analyze the messages and topics. These skills will be applicable throughout the entire year.

“When grading this assignment, number one, they need to understand their topic,” Juliano said. “I’ll be able to see that through whatever message they’re conveying. Basically from the skill viewpoint that they understand how to build a message, visually, and that will then help them analyze other cartoons. Content wise, it has to be accurate to what their topic is about.”

With lots of information to unpack on the vast topic, political cartoons can show different perspectives of the war. Juliano hoped that researching the necessary background information will put students’ in the shoes of those who lived during that time.

“There is a lot of political cartoons and propaganda behind the War of 1812,” junior Anthony Pham said. “A lot of the information about the war comes from political cartoons. In the past there may have been more written documents, but there were a lot of people trying to persuade others with cartoons during this war.”

Many options were included for approaching the assignment, like creating cartoons digitally or physically, and finding the proper resources for students to execute their ideas.

“I have to create a cartoon about the Treaty of Ghent,” Windon said. “I got an idea for my cartoon from the content slideshow that he [Juliano] showed us. There was a picture in the corner of two soldiers shaking hands, so I wanted to separate both sides by making them wear different colors. I’m going to make both of them super wounded since the war was taxing for both sides, and have a white flag in the middle to symbolize neutrality.”

Students had the opportunity to explore the events from the three-year war, and express their opinions on the matter.

“The one thing that political cartoons do very well is express a position,” Juliano said. “It’s going to be a good way for my students to understand the varying viewpoints about the War of 1812, so we’re trying to replicate the different views of the country. You can express a lot of ideas through these cartoons, and it’s a good change of pace from our typical essay-formatted assignments.”