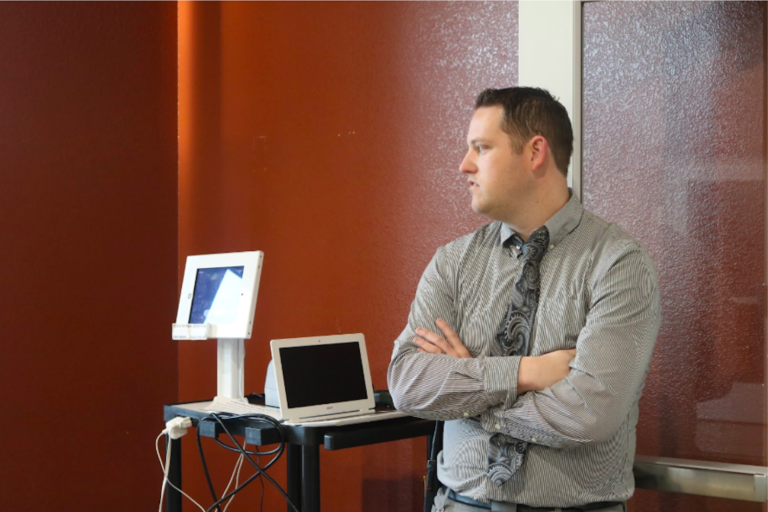 Waiting for the clock to hit 6:59 a.m., acting dean Pate Thomas sets up the badge scanner. Students who arrived after 6:59 a.m. were required to start heading to the cafeteria. “Hopefully [this policy] is more effective,” Thomas said. “There's more accountability for students built in.” Photo Credit: Alyx Beeten

After reviewing the previous system, paper tardy slips will no longer be used. As of April 2, students who are tardy will be required to enter through the cafeteria and have their badges scanned.

“This [new policy] will make it easier to see who’s tardy,” acting dean Pate Thomas said. “This will show that they’re actually on campus. [The policy was put in place] because the old way was out-dated. This way it shows whos actually tardy and often.”

Badges will be scanned in the cafeteria starting at 6:59 a.m. by an administrator or campus security. Names will then be compiled into a spreadsheet that will be shared with teachers to identify if their students are tardy or loitering on another part of campus.

“It’s interesting to see who’s late every single day,” physics teacher Patrick Waddington “It’s reassuring to see that it’s not only my class and it’s a habit across the board.”

Students who arrive later than 30 minutes after the bell rings will be marked absent. Tardy infractions will result in the following consequences:

“I feel like this new policy is good and bad,” junior Kylie Momsila said. “It’s good for the office staff because there were a lot of students late in the morning so the line in the office stretches out past the doors.”

Students who come in after the first period will scan their badges themselves at the front office.

“I suppose [this new policy] saves paper and holds students accountable,” junior Ayame Faria said. “Personally because the change was so sudden and the cafeteria is farther away than where I usually get dropped off, I ended up being later than I would have if I went the regular way.”