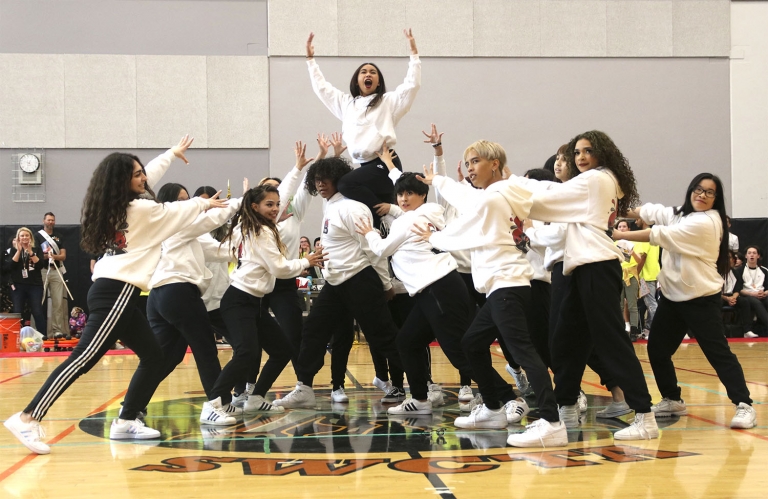 Holding their end pose, Dance Club members await their applause. Dance Club was the only club that performed at the Coyote Olympics assembly. “I think I did pretty good,” Dance Club member Kirsten De Perio said. “I got all the moves down and my facial expressions were fine.” Photo Credit: Sandra Amores

Continuing the tradition, Mexico won the fourth annual Coyote Olympics, at the assembly on March 6.

“After last year, I felt pretty disappointed since we made it to the finals but got fourth, so we had nothing to prove of it, since there were no fourth place medals,” senior Joshua Damaso said. “This year I just wanted to win something since it’s our final year [here], so it feels rewarding to comeback for the second year in a row and get first place this time.”

“I was really proud of my team for making top four,” senior Kevin Bajamunde said. “We worked together to get this far and it was a highlight of my senior year. My favorite part was creating memories with my friends through the different activities of Coyote Olympics.”

“As the incumbent winner from last year, I am proud to earn another [award this year],” Castillo said. “I am humbled by this opportunity [and] to be nominated is an honor itself. I look forward to continuing my gender fluid fashion.”

Since other clubs are preparing for Coyote Coachella, Dance Club was the only one to perform. To accommodate this, Student Council implemented audience participation games.

“I think dance club did better than I expected,” Dance Club member Kirsten De Perio said. “Obviously, it wasn’t a perfect performance as there were some mistakes but I feel that our hard work paid off and many of our friends seem to agree.”