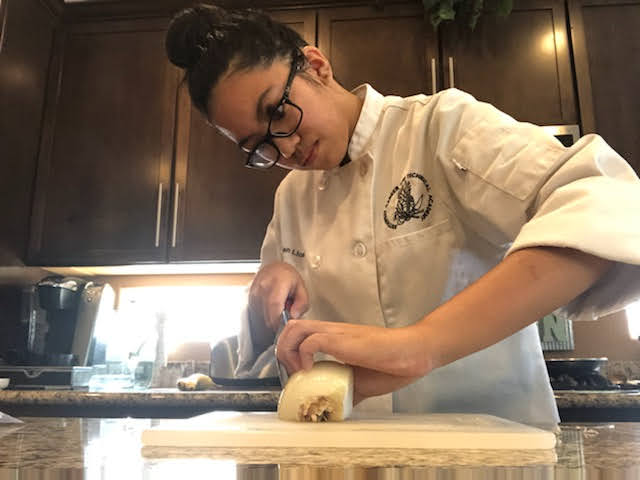 The start of the new quarter has brought students a new way to practice their cooking skills in the form of home cooking labs in Chef Hadobas’ Culinary II class.

“I can learn about all of the aspects of making the dish we were assigned because, unlike doing labs at school, we don’t have a group of people to work with,” sophomore Jayden Licanto said. “I think this really helps me practice multitasking and understand what could’ve gone better or what I did well.”

Home labs require students to demonstrate various cooking methods and techniques, such as cutting ingredients and following recipes on camera.

“The purpose of the home labs is to keep the kids in the kitchen cooking, polishing up their skills, and reviewing some basics as well as introducing some new content,” Hadobas said. “I think it’s important that the students are actually in their kitchens cooking rather than watching me demonstrate things.”

When turning in home labs on Canvas, students must upload pictures prior to, during and after cooking – then answer reflection questions pertaining to what they can improve on.

“Sometimes, I don’t have accurate ingredients or utensils, so I have to improvise by getting the ingredients as close as I can,” sophomore Cameron Narciso said. “For example, Chef might ask for a large onion, but I’ll get a few medium ones, or if I don’t have a specific knife, I’ll use one closest to the one required. I also ask my mom and other people who can see my food in real life for opinions like how it looks and tastes.”

In addition to teaching students to learn from mistakes, the home labs have benefits physical classrooms do not offer, such as being able to take as much time and attempts as desired, looking back on recorded demonstrations, and not having to worry about the lack of others’ cooperation.

“You have that opportunity to be able to serve food to your family right off the bat,” Narciso said. “Before, in school, I’d save cookies we made at school for my sister at home, but end up eating them later because it got too messy. I also think it’s nice to be able to cook in the comfort of your kitchen.”

As with many program area classes, they rely heavily on direct interaction and as a way to ensure student engagement and understanding, Hadobas has made many changes to the curriculum, such as making recipes that are difficult, but still inexpensive and accessible with at-home equipment and ingredients.

“Virtual teaching is definitely a challenge,” Hadobas said. “I feel like I am running a cooking show; I’m the writer, director, producer, cameraman, dishwasher, prep cook, everything all-in-one.”

Online schooling has brought many changes, but culinary students are excited to expand their knowledge and experience.

“I am excited to learn different cultural cuisines because it’s something I don’t know much about but have a great interest in,” sophomore Kennedy Taylor said. “I’ve tried a Russian dish called Piroshki, a fried bread pocket filled with ingredients like salmon or beef with cream cheese, which was really good, so I’d like to learn more about other different types of dishes and recipes.”