JARA REINSTATED AS SUPERINTENDENT, BOARD DIVIDED 4-3 Saga between superintendent, board trustees continues as vote to terminate superintendent is rescinded 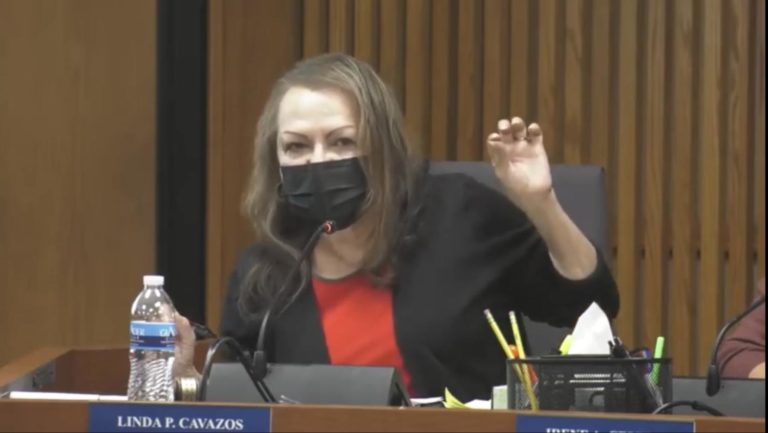 Board President Linda Cavazos speaks to the audience and fellow board members following the revote. Cavazos has been a strong critic of Jara, voting to finalize the termination during the revote.

Jara, who after his termination filed a $2.6 million lawsuit against the Board for “harassment” and creating a “hostile work environment”, is asking for “assurance” from the Board that these problems will be eliminated. He hasn’t confirmed whether or not he will be staying for the job or if the lawsuit still stands.

“After last night’s vote by the Board of Trustees to reverse its prior termination decision, which would potentially allow me to continue as CCSD’s Superintendent, I am working with my legal counsel to review this development,” Dr. Jara said in a statement released. “Given the concerns that I have previously expressed, we intend to work with the Board and its legal counsel to determine if there is a pathway that would allow me to continue as Superintendent while also implementing appropriate assurances to address and eliminate the harassment and hostile work environment. No matter the outcome of this decision-making process, my focus on and commitment to our students and the District’s staff remains steadfast and will not waver.”

Trustee Danielle Ford, a staunch opponent of Jara, expressed her thoughts on the superintendent saga.

“I have stated in the past that I hear from employees that there is a culture of fear and retaliation, that he has repeatedly threatened the board … There have been instances where he clearly lied to public officials,” Ford said in a statement to FOX5.

Meanwhile, Board President Linda Cavazos, who is also voted to terminate Jara, also gave a press conference prior to the revote, in which she responded to claims of harassment from Dr. Jara.

“It would go both ways. If that’s something that they wanted to do, I am certainly open to a discussion on that and being able to get a lot of things out into the open,” Cavazos said to 8NewsNow.

During the board meeting, many other issues arose such as the Anti-Racism Policy, which many parents and public commentators expressed their support for it, along with concerns for the Anti-Defamation League’s intents on implementing these policies in education. Advocates also spoke about AB 195, which would require schools to have more available resources for translations.