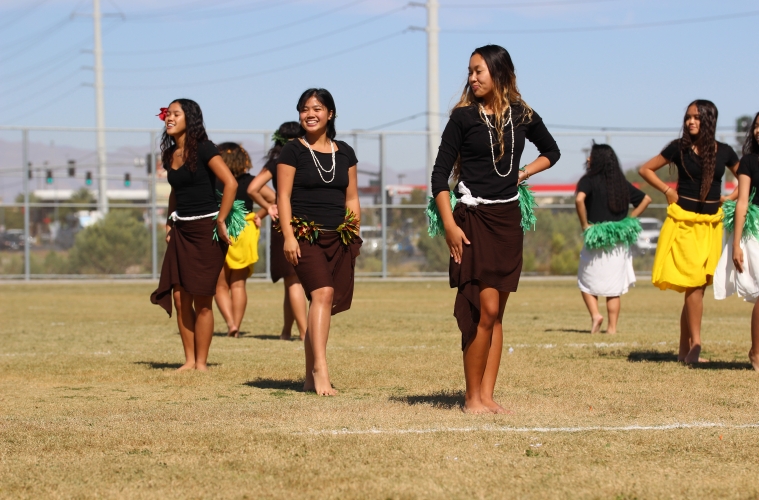 Being the only seniors left in the club, seniors Ghulianny Ferraer, Ghyanni Ferraer and Angelica Pagan perform for one of the last times. Poly Club lost a lot of seniors due to open periods and now they're left with three seniors in the club. "The club is really small now, but on the positive side, I can connect with my girls better,” Ferraer said. "There's less people, so we can make a better family this year." Photo Credit: Sandra Amores

After budget cuts resulted in major changes to senior schedules, the solution of open periods had an unintentional consequence on club membership.

Since many seniors now have the last period of the day open, many are choosing to not return for club meetings. This has resulted in a noticeable decrease in representation from upperclassmen.

“Last year, the club was full of seniors and juniors, and now, we have a small handful of seniors,” DECA President Jocelyn Miller said.”It’s kind of sad, we’re seniors, it’s going to be over in a flash, enjoy some time with your peers any chance you have.”

Previously, seniors were allowed up to two open periods only at the beginning of the day, unless they had an internship or work experience.

“I think we would have more senior members and involvement if they didn’t have open periods at the end of the day,” FBLA President April Valdez said. “Unfortunately, I don’t think anything can be done. Especially since students are not allowed back on campus after they have left. If admin allowed re-entrance, maybe more seniors would be in clubs.”

Seniors wishing to remain in clubs were given the option to stay in the library during seventh or eighth or they may return to school after they left early. However, many seniors have faced different issues with returning to campus because of work or lack of transportation.

“I feel like because seniors have open periods at the end of the day there’s been an increase in underclassmen over seniors,” Key Club Vice President of Spirit Alisha Tulio. “It makes it seem like the upperclassmen, specifically the seniors, aren’t as interested. It’s like they all lost their dedication because of open periods.. However, I do understand because when you go home, you want to relax and not come back to school for an extra two hours.”

For certain clubs, they have lost almost all of their senior members, such as DECA. For Poly and Key Club, they have a select few seniors, where most are on board.

“Because of afternoon open periods there’s no point in being in Poly Club,” senior Kyle Nicdao said. “I’ll be relaxing at home and I won’t want to go back to school just for a club.”

And while many clubs are struggling, some have made up for the defecit with underclassmen, such as HOSA. The solution for HOSA was to gain more members from a variety of programs, rather than just from medical students.

“HOSA’s solution to the loss of seniors was to not let that take over us,” HOSA President Kelsey Rowan said. “HOSA isn’t just about seniors, it’s about everyone. I’m glad to welcome every new member because this is a new year which comes new faces. My advice to other clubs to get more members is to show off what that club is about, whether it’s school news, posters or social media.”

While most clubs are moving forward with lower numbers, they are already planning recruitment ideas for next year.

“We’re focused on making sure our current members want to return next year, especially juniors about to be the seniors with open periods,” Miller said. “If members stay interested, they’re more likely to bring their friends next year. I also hope the board next year pushes really hard at freshman orientation and during the first week of school, to make sure they have a lot of underclassmen.”