‘We the People’ members earn third place in district three Members prepare for next round of testimonies for state on Feb. 1 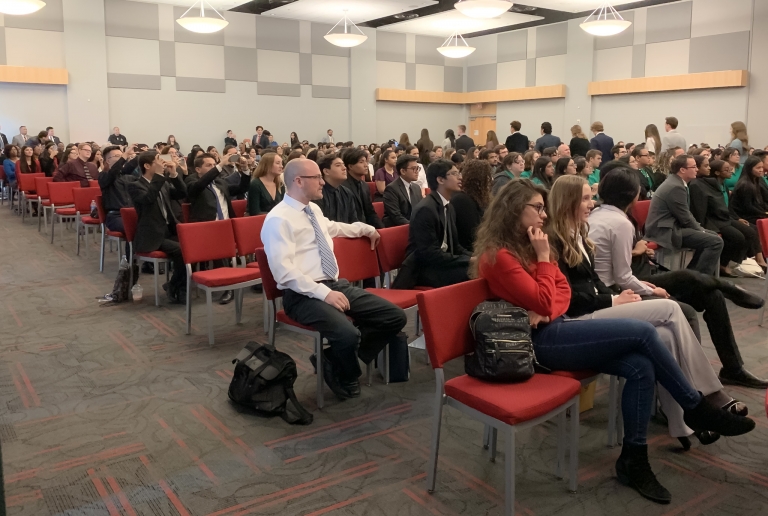 Waiting for the results, ‘We the People’ members watch the award ceremony. ‘We the People’ members won third place, on Dec. 14. “This experience really helps build [students] up for college and life as a citizen,” Government teacher Joseph Juliano said. “It’s just [about] being able to engage in their communities and make a positive impact in the future.” Photo Credit: Patricia Taylor

Qualifying for the NV State Competition for the fifth consecutive year, members of the “We the People” team placed third in the congressional district three division on Dec. 14.

“Considering the pressure of it being my first time doing this type of competition, I did pretty well, but I feel I could’ve done better,” senior Casey Joseph said. “I’m pretty happy that I was able to think on my feet though.”

‘We the People’ is a national congressional hearing competition that allows students to prepare testimonies in which they were questioned on issues related to constitutional democracy. Questions were focused on topics such as war powers and voting rights.

“I really liked the questions we had,” senior Samer Youssouf said. “[They] were very broad which allowed us to have many different answers. This allowed us to be creative with our speeches. Since you never know what kind of questions the judges may ask, you want to be prepared for whatever they may throw at you.”

For the last five years, Juliano’s students have qualified for the state competition in Reno. Last year, the team placed third.

“This experience really helps build [students] up for college and life as a citizen,” Government teacher Joseph Juliano said. “It’s [about] being able to engage in their communities and make a positive impact in the future. There will be nine teams at state instead of 12, so the teams have a higher probability of winning state, but also, the nine teams will all be strong.”

Contrary to previous years, due to the lack of financial support some schools had and the time and effort it takes to compete, new divisions were put in place due to fewer teams participating.

“There are a lot of reasons teams stopped doing ‘We the People’,” Juliano said. “For some it’s time, I spend hours of my time doing this. For a lot of them, it was the finances, they used to be given extra money to do ‘We the People,’ but now they don’t have the money anymore. However, the best teams are still doing it, so the competition is still just as fierce.”

Additionally, the competition was held at the University of Nevada, Las Vegas, for the first year.

“[UNLV] was okay for us, I thought it was nice to be there,” Juliano said. “I liked it better when it was at West Career Technical Academy because of the setup and the classroom while at UNLV the desks were bolted down.”

The teams who qualify for the next round will compete at the national competition held in Washington, D.C. from Apr. 24-27, 2020.

“Students ultimately learn how and why citizenship works and why it is actually important to take your responsibilities as a citizen seriously,” Juliano said. “The more you understand how our system of government works, the more empowered you are to get involved in it.”