EDITORIAL: Lord have mercy Religion belongs in homes, not in our faces 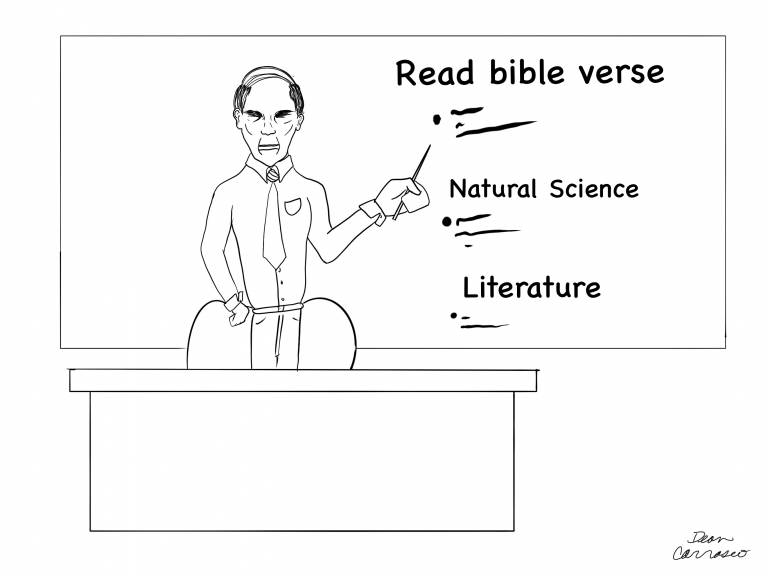 In an effort to shove religious beliefs down students' throats, lawmakers are depriving students of the educational experience that they deserve. Photo Credit: Dean Carrasco

The phrase is as ancient as English-there are two things you never talk about in public: religion and politics. Unfortunately, this wise piece of advice for people seeking to avoid conflict has seemingly faded from the American ethos, especially with religious beliefs creeping into classrooms.

States such as Missouri and Georgia have passed laws mandating that the Bible be taught in schools. Kentucky Governor Matt Bevin recently asked students to participate in “Bring your Bible to School Day.” It appears that religious tension and conflict have inflicted classrooms.

Inviting religious teachings into schools exclude non-Christians and hurt the educational quality of all students. We believe that classrooms should be places of learning, not of advancing a religious agenda.

Many lawmakers defend these laws promoting Christian doctrine in school by arguing that Christian culture and history is extremely important. Now, while this is of course true, it doesn’t change the fact that these laws go further than that and actually advocate for particular religious beliefs.

The aforementioned “Bring Your Bible To School Day” advocated by Bevin has the explicit purpose of encouraging students to become Christians. And laws that force science and English teachers to abide by Christian law are an endorsement of those religious beliefs. There is a large distinction between using books like the Bible as a piece of literature to be analyzed, and using it as a tool of indoctrination students to converting to Christianity, which these laws do.

Religious promotion in classrooms is also exclusionary to members of other faiths. Almost 44% of students are Jews, Muslims, Buddhists, non-believers and others, and they have the right to learn in schools that care about their education. Are these students not entitled to the same quality of education as Christian students?

Along with hurting students, these laws violate the First Amendment. Courts have repeatedly struck down laws that promote religion in the classroom on the basis that they are in conflict with the Establishment Clause of the First Amendment. Lawmakers who view classrooms as a tool to propagate their personal religious views are violating the most important tenet of the United States constitution.

Religion is an intensely important part of millions of Americans’ lives, and should thus be treated with respect and sensitivity. Students in schools across the country have deeply held religious beliefs that should be the concern of them and no-one else, including lawmakers who seek to use classrooms to promote their religious beliefs. Let’s make sure that we respect the sanctity of all religions and protect all students’ right to hold whichever faith, or lack of faith, that they’d like against politicians who want to violate them.