THE FALL OF FOX NEWS: HOW THE NEWS NETWORK FACES THE MOB THEY CREATED What happened on Election Day, and will they ever come back? 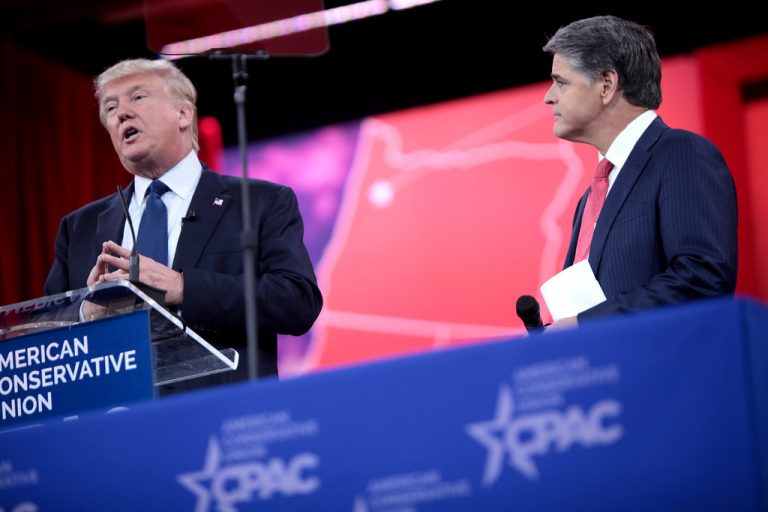 Through influence and appeal, Fox News and Donald Trump worked together closely to provide a leading voice in the Republican party. But, because of betrayal and misinformation, the network would soon fall from the GOP ranks. Photo Credit: Gage Skidmore

Rupert Murdoch’s empire is falling apart. Fox News, one of the most influential conservative cable giants in the world, is in a struggle against other right-wing media groups, such as Newsmax and One America News Network, for conservative viewers across the nation. Liberal rivals, such as CNN and MSNBC, are on track to overtake first place from Fox News in the Nielsen DMA Rankings, the top ranking group in the United States.

But what caused the end of their two decade domination over America’s major media networks? And more importantly, will they ever make it back?

It started on election night. Although it sounds simple, calling Arizona early for Biden (which was one of the key states he needed to secure to win the election) started the decline of the network, even though the prediction was factually supported.

To the average person, this may seem like nothing at all: a simple, and surprisingly quick prediction by Fox News. But considering the stakes that night, the magnitude of how it impacted Trump supporters (the majority of their viewership) was huge. It’s noticeable to observe the cult-like personality around Donald Trump – many supporters view him as the person who’s going to bring American values and patriotism back to their beloved nation. This makes Trump supporters a hard crowd to handle – they’ll do anything Trump says, referring back to the Capitol riots.

And because Fox News is the largest conservative network in this decade, it was natural for President Donald Trump to work with the channel. It was the perfect tag team – Fox News appealed to Trump supporters by simply supporting him, while Trump continued to influence the anchors of the channel. However, this in turn caused a huge problem that Fox News needed to be compliant with: the network needed to be Team Trump 100% in order to keep their Trump-loving viewer base.

For Trump supporters to see their leader failing in an election against whom they claim to be a “dementia-ridden old communist who will slowly destroy America,” in which they were strongly guaranteed Trump would win, was heartbreaking to them. When Fox News called the election for Biden, they viewed it as a betrayal and a disgrace to the Republican Party.

Trump was already denouncing the company before the election after the death of Roger Ailes (the deceased media mogul and former Fox News CEO) for their criticism of certain topics, so calling the election for Biden was the final strike. Conservatives tried to hide their shame and defended their patriotic pride by denying the truth. The ill-informed conservative monster they created had backfired and attacked them. While the viewership of Fox News collapsed, many fled to OANN or Newsmax, which was publicly endorsed by Trump.

Although Trump supporters have found a new voice within the party lines (one that tells a political narrative that they agree with), Fox News is already making a comeback. With a new president in the White House, Fox’s agenda isn’t about supporting Trump anymore – it’s about attacking President Joe Biden – something Fox News excels at. If Fox News is able to hide their disloyalty and push the attacks on the Biden administration, they can secure their top spot in the Nielsen DMA rankings for a few more years.

In fact, they’ve already reclaimed their spot in early March. Because of the increase of rushes against Biden, their viewership has increased since their downfall in January. Their primetime viewership topped out at 2.47 million people per day at the end of February, beating out MSNBC’s 2.19 million viewers and CNN’s 1.69 million viewers. This is a major jump from the 1.49 million viewers they had in January, which ranked them third amongst the three channels. Luckily, they may be able to keep their spot for a while due to the 36% primetime decline viewership from CNN since Inauguration Day.

It’s apparent that the biggest player in conservative politics has fallen through the ranks. It’s a true tragedy for both Trump-supporting and non-supporting conservatives alike, but their comeback may just be enough to end the panic they had a few months ago.