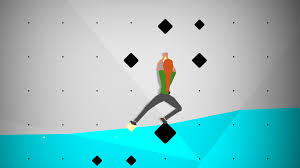 There is more to rock climbing than just strength and endurance. Climbing requires one to find the most logical way to the top of a wall while utilizing a variety of complex techniques. The game “Crux,” created by the Swedish developer Benjamin Dressler, was created to provide everyone with a rock climbing experience from anywhere in the world.

“Crux” teaches users about different climbing techniques, as well as how to use them. To start, a player must swipe the screen to move the climber’s hands and feet along the climbing holds. Each individual hold has its own timer, so quick thinking and movement is essential for “sending” or completing the route. If the climber stays onto a “hold” or diamond for too long, the avatar falls and has to start the route over again. As the user progresses through the levels, the holds get smaller, the climbs get harder and the pressure for figuring out a sequence is intensified.

The game has over 100 levels of pre-made routes to improve and test the climber’s skills. However, if one is looking for a challenge, they can become a “route-setter” and create their own unique rock climbs. As a route-setter, the user can climb on their creations and share them with other players within the app. There is also a new feature where route-setters can hold competitions for other players to battle it out and see who can complete their routes in the fewest amount of attempts.

When playing “Crux” the levels quickly get harder, making it a challenging game to complete. Getting stuck on a route and having to try it multiple times is common, especially because there are no power-ups available in the game. “Crux” is completed through perseverance and dedication.

This game does a really good job of including a lot of different climbing techniques, as opposed to just left-right ladder movement, that a lot of previous climbing games embodied. All of the opportunities for interaction, such as sharing routes with other users and competing together in competitions makes “Crux” more engaging, social, and fun for larger groups of friends. Another appealing part of this game is the display and how life-like the virtual climbing gym actually is.

Spark: Find out about Native-American Heritage with these important facts

On the other hand, the app could have done a better job with the way the user controls the movement of the climber because with the left side of the screen responsible for moving the feet and the right side for moving the hands, it is hard to get the hang of it at first. Additional minor issues include the lack of variety in holds and wall angles. In a climbing gym, a climber is usually faced with different shapes, textures and difficulty of holds that are not present in this game. Different wall angles in a climbing gym require certain techniques which are also not included.

“Crux” is a fun and engaging game that makes the climbing experience available to everyone. Although there are some minor issues with it being unrealistic when compared to a real gym, it embodies the main concept, challenge and overall fun of rock climbing.