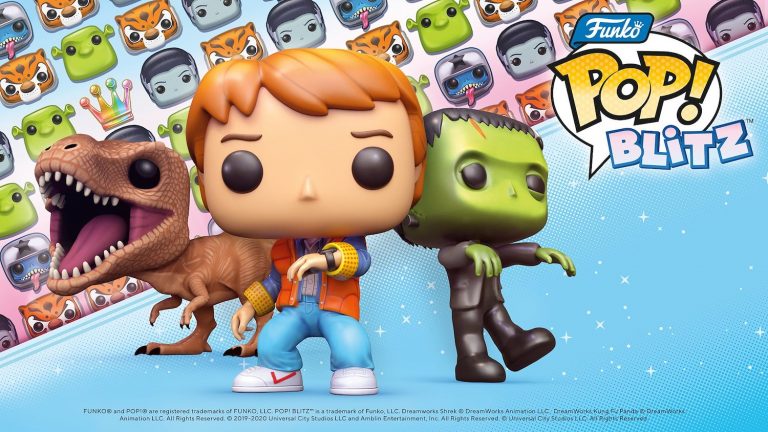 Play, collect and match with iconic Funko Pops! that brings this game to life. Partcipate in special events, use power-ups and blast the board with a unique move for every Funko Pop!
Rating: A Photo Credit: N3TWORK Inc.

With 8,366 Funko Pops!, it was only a matter of time before they entered the world of mobile gaming. Now, Funko enthusiasts can take their fandom into a fun and frenetic match-three game environment.

Resembling the popular app, Disney Emoji Blitz, with its main gameplay and flashing graphics, Funko Pop! Blitz brings it to the next level by adding in special events and unique power-ups. Each Pop has its own unique abilities that are activated if the character is matched with its icon. For example, if a player chooses “Tigress,” her ability is to multiply herself on the board which is beneficial when trying to boost that specific character. This is an entertaining feature because users can control which characters they actually want to boost and which ones they don’t.

Power-ups are a prominent element in this game because this is how users can earn more coins. There are various power-ups such as the “Rocket” that clears an entire row or column, the “Bomb”, is activated when five Pop icons of the same type are represented in a T or L shape and when matched, this then triggers an explosion that clears at least 20 icons instantly. Lastly, the “Rainbow Crown” is where players can move any icon on the board and clear all the icons of that Pop character. I enjoy these power-ups because they allow me to gain more points and level up faster and more efficiently.

“Blitz Mode” is one of my favorite parts of this game simply because you get double the points when it is activated. For it to activate the player has to fill up a meter bar by matching three characters on the board which isn’t a hard task at all. Everything throughout this game is very simple to accomplish, yet players can do so much with even the smallest power-ups.

One cool aspect of this game are the weekly “Special Events.” Players can collect “rare” Pops for a limited amount of time for a specific collection. Some examples of different events are “Back to the Future,” “Care Bears,” “JAWS” and “Jurassic Park.” This part of the game is fun and gives players something exciting to look forward to every week.

The only negative is that the game could potentially get old quickly only because of how simple it is. This isn’t necessarily a horrible thing, but it would be nice to have added special events during the week, more mystery boxes or even just a wider variety of characters to choose from.

Funko Pop! Blitz is a unique and cute game for someone who doesn’t play a lot of video games. The Funko Pop! characters add a whole new experience for users when playing and make the game even more fun because of all the different themes. This is definitely a favorite of mine and anyone who loves collecting Funko Pop! figures will surely enjoy this game.