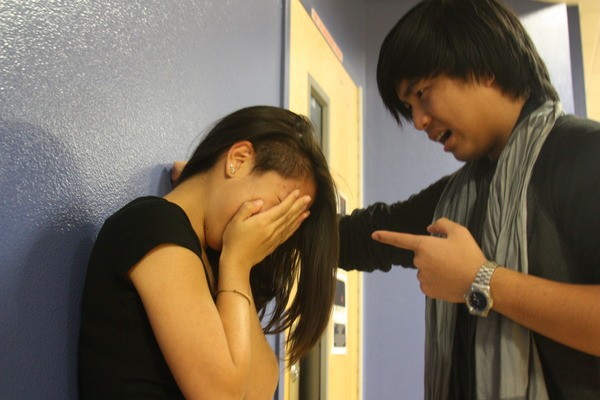 Although couples may seem happy at first glance, arguments and constant bickering can arise at any moment.Photo Credit: June Gabriel Santos

One day you are mindlessly walking to class, when all of a sudden you hear a faint squeal coming from the lunch room. No, a robbery was not committed. No, someone did not fall, and no, Justin Bieber is not at your school. It is just that typical couple that argues each passing period and during lunch about the most nonsensical matters, but still stays together because they think they are a perfect match.

High school teenagers put their time and money into relationships that they think will last forever, but what they do not understand is that these relationship will most likely fail. With the constant fighting, arguing, and struggles common in teenage relationships, the chances of them staying together through high school is slim to none.

I understand that teens will be teens, but what I don’t understand is why couples take arguments to another level by extending it for more than one day when they are trying to make their relationship last. Why is it so hard for these couples to just apologize? Why is it so hard for them to move on and forgive and forget? I have spent countless hours trying to comprehend this, but I still cannot find a true answer.

And let’s be real; these relationships end because of the constant arguing. Whether it is about something small, like not picking up the phone whenever they call, or something as major as cheating on a significant other, arguments happen all the time over the smallest infractions.

I feel as if I have of experience with the types of relationships that involve constant arguing. I have gone through many of these relationships and throughout these experiences, I have obtained valuable knowledge. Looking back at it now, I was just being very immature.

My last relationship was one of those situations where we would argue constantly. She would be annoyed if I did not reply to her texts or answer her calls, and because of this, we would argue and then not talk to each other for days. Eventually, arguments become constant and the couple breaks up.

Yes, I was in one of the relationships that never said “sorry” to one another, and yes, I sound like a hypocrite by telling couples to just say sorry. But now that I have learned the hard way, I understand that saying sorry is not as hard as it sounds.

I strongly believe that there is a time where one person in the relationship must mature and apologize. Whether they are wrong or right, one must be able to apologize at one point. After they have said sorry, then they can learn how to forgive and forget and revert back to their constant bickering in the halls.