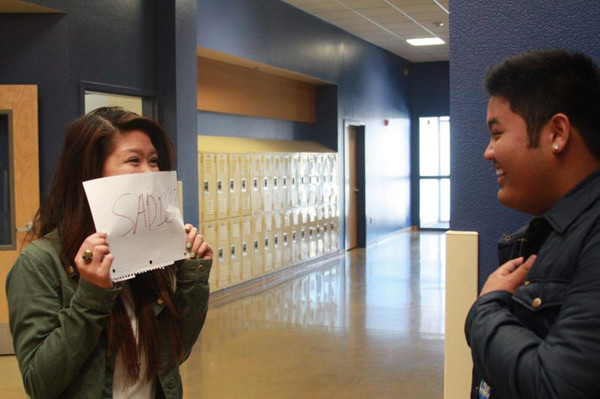 Many boys feel obligated to say "yes" when asked to Sadie's, but they should think twice before giving an answer.
Photo Credit: Jacob Berroya

Sadie Hawkin’s is coming up fast and the excitement is beginning to stir. However, there are situations that give me something to think about when they come up.

For example, those that are asked by girls are usually obligated to say yes. Whether or not they want to go with that person or not, the answer is usually “yes,” due to the fact that they worked so hard to publicize their proposal. Although there is a sense of obligation for guys, do they really need to say yes?

The group of friends that I hang out with are in this exact same position. They were recently asked to Sadie’s and of course, said yes to the person. However, deep down inside I know they are not looking forward to it, and the worst part is that the girls are just going to be let down soon after. The girl may be happy for that moment of brief satisfaction, but the end result will just be heartbreak and a long night of crying themselves to sleep.

All of this could have all been avoided if they were honest with each other.

Sure, there are times where there is a couple going just as friends, but it is safe to say that most pairs that attend usually have some sort of feelings towards each other. Now, I am not saying that guys should automatically say “no” when they are asked by a girl, but they should at least think of the consequences. Will you guys still be friends? Will you still talk? And most importantly, will things be awkward between the two of you after the dance?

I advise the people going to make sure to set standards for the night. Make sure that you two are on the same page, so that no one will be hurt at the end. Also, make it that you two are only friends, or even say that you are not interested in any kind of relationship. And if by any chance you are looking for something to come after the relationship, make sure to clarify that your intentions are at the friend level.