PRO/CON: Enough is enough: America’s problem with gun control Gun violence has become an increasingly significant issue within the U.S., and must be combated 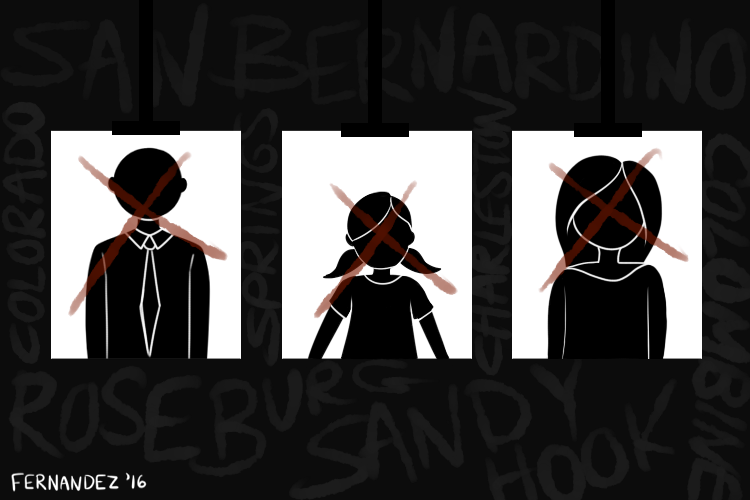 Suicide, mass homicide, gang violence, domestic violence, accidental deaths— these all have one thing in common: guns, a growing problem that increases death rates in all of these categories.

Sure, figurative opposer of gun control; people kill people. But do you know what people are using to kill people? Guns.

“It is our constitutional right to carry guns. ‘The right to bear arms’ is written in the Second Amendment of the U.S. Constitution,” figurative opposer of gun control exclaims.

Yes, however, the second amendment is not an unlimited right to own guns. Gun control laws have been around since the Constitution was first ratified. According to “A Well Regulated Right: The Early American Origins of Gun Control” some examples of gun control throughout colonial America included criminalizing the transfer of guns to Catholics, slaves, indentured servants, and Native Americans, regulating the storage of gunpowder in homes, banning loaded guns in Boston houses and mandating participation in formal gatherings of troops and door-to-door surveys about guns owned.

According to President Obama in a recent speech, 30,000 Americans are killed each year by guns. Some believe that due to this reality, guns are even more of a necessity for individuals to protect themselves in threatening situations. However, according to “Firearm Violence, 1993-2011” of the 29,618,300 violent crimes committed between 2007 and 2011, only 0.79% of victims (235,700) protected themselves with the use of a firearm. Although to some it may seem to the contrary, guns are much more a part of the problem than they are a solution to crime.

Some examples of how gun control can be reformed include expanding background checks and closing background check loopholes to keep guns out of dangerous hands, banning military style assault weapons, and increasing access to mental health services. President Obama is currently attempting to combat gun violence through a new set of executive actions. During his speech on the matter, he explained: “Each time this comes up, we are fed the excuse that common-sense reforms like background checks might not have stopped the last massacre, or the one before that, or the one before that, so why bother trying. I reject that thinking.”

With so many mass shootings occurring on an almost regular basis nationwide, we as Americans are becoming desensitized to the significance and tragedy of these events. As a student, I feel that my safety, or at the very least, the consensus that I will not be shot and killed upon attending school, should not be an issue on my mind. Yet, more and more often nowadays, news of another mass shooting breaks out, President Obama makes a public statement about gun control, Americans brush it off, no progress is made, and the cycle continues.

At some point this cycle must end. At some point we as a country need to accept that the lives of those around us are more valuable than one’s hobbies or traditions (and that enforcing stricter gun control does not mean that we must give said hobbies and traditions up). In order to break this cycle, we must be willing to work collectively as a nation to create real change. We have to do more than simply let out a sigh and go “oh well” every time lives are taken by bullets.

Q&A: What are you going to buy for Black Friday?

As an international superpower, the death rate due to gun violence within the U.S., which is significantly higher than any other developed country in the world, is frankly embarrassing. As specified by the Council on Foreign Relations, the United States, with less than 5 percent of the world’s population, has about 35–50 percent of the world’s civilian-owned guns, according to a 2007 report by the Switzerland-based Small Arms Survey. The U.S. also ranks number one in firearms per capita, and has the highest homicide-by-firearm rate among the world’s most developed nations.

Similarly to the U.S., guns are an enormously significant part of Swiss culture. Due to the national pride in gun ownership, sense of patriotism and national identity associated with guns, and recreational use of firearms in Switzerland, a majority of Swiss citizens legally own guns. “Nobody bats an eye at the sight of a civilian riding a bus, bike or motorcycle to the shooting range, with a rifle slung across the shoulder,” TIME writer Helena Bachmann explained. However, according to a 2011 U.N. report, government figures show about 0.5 gun homicides per 100,000 inhabitants in 2010, in comparison to the U.S rate, which in the same year was about 5 firearm killings per 100,000 people, despite the prevalence of guns in Switzerland.

After a mass shooting in 2001, officials began to reconsider their gun laws. However, due to Switzerland’s already stringent gun control laws (The law allows citizens or legal residents over the age of 18, who have obtained a permit from the government and who have no criminal record or history of mental illness, to buy up to three weapons from an authorized dealer, with the exception of automatic firearms and selective fire weapons, which are banned) no other mass shootings have taken place in the peaceful nation of Switzerland since.

The fight to minimize gun violence is no simple or easy task. It will take years to see any visible progress in the decrease of gun violence, especially considering how significant guns remain within American culture today. Nonetheless, this battle is one that must be fought if the U.S. ever hopes to reduce the number of lives lost by the pull of a trigger.