Analysis: No clear winner in the vice presidential debate Both candidates equally negate their opponent’s points in a civilized argument 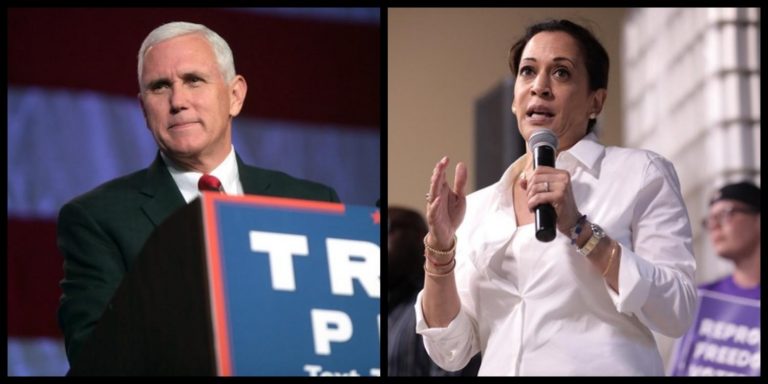 America tuned in to the vice presidential candidates debate on Wednesday night, while a daring and controversial election loomed closer. I lost hope last week when I heard the first presidential debate between Donald Trump and Joe Biden. It was a reflection of each of the candidate’s worst traits. The debate last week wasn’t focused on making Trump and Biden look good, it was focused on making each other look bad. However, Wednesday’s debate, which discussed several different topics, sparked a little hope for a civilized election after all.

Kamala Harris, the Democratic candidate for vice president, started off strong. “The American people have witnessed what is the greatest failure of any presidential administration in the history of our country,” Harris said. Frankly, she’s right. 210,000 people are DEAD in our country, more than the deaths caused by the flu, and President Trump recently caught COVID-19 himself. Although Vice President Mike Pence did try to counter her point, he couldn’t argue with cold, hard evidence.
Winner: Harris

In my opinion, Pence won the topic of economy in the debate by a long shot. Harris made empty promises that really wouldn’t be achievable in a party majority Senate. However, Pence mentioned the general well-being of the economy, something many voters believe Trump handled well. He mentioned that average incomes increased by $4,000, and around four trillion of the taxpayer’s money were handed back. Although Harris had powerful words for the presidential administration’s handling on healthcare, it was Pence who snagged the win for this topic.
Winner: Pence

Although Pence tried to defend himself by mentioning how a free market led towards the advance of solving climate crises, Harris did mention an economic plan leading towards renewable energies, something Pence didn’t do much of. The presidential administration hasn’t been too keen on climate change, constantly ignoring the issues of the problem. For example, he recently blamed the California wildfires on forest management, which wasn’t really a part of the topic.
Winner: Harris

China, in my opinion, has been a cause for the many catastrophes spreading around the world as we speak. For example, take the outbreak of COVID-19, or the imprisonment of Muslims in their mainland. Nevertheless, Pence brought the issue of holding China responsible for their actions, to which I must agree.
Winner: Pence

However, in a sense of relationships with our allies, Harris won the topic easily. She mentioned the conflict between Russia, North Korea, and Iran. She also brought up how President Trump has failed to protect our allies closely from these rising global powers. In terms of Pence, he changed the topic to Kayla Mueller, a humans right activist killed by ISIS. This was a move he shouldn’t have done.
Winner: Harris

Topic 6: Filling in the vacant seat on the Supreme Court

Following the death of Supreme Court Justice Ruth Bader Ginsburg, Trump was met with backlash regarding appointing a new judge too close to the election. Although Trump is legally allowed to nominate Amy Coney Barrett for the new opening, Pence had a hard time trying to defend the choice to nominate Barrett. Harris used reasoning, stating that the American people should have the choice, and how President Abraham Lincoln didn’t choose to nominate someone during an election year.
Winner: Draw

Analysis: Election 2020 Endorsements: Who deserves to win? Ahmed and Rhamil discuss which candidates are fit to serve the people

Breonna Taylor, a 26 year old woman, was shot in her apartment by police following a warrant for her boyfriend. Taylor’s death sparked racial debate and protests nationwide, with many calling to arrest those responsible for her death. Although both candidates stated their support for Breonna and her family, they were divided between the lines of reforming police. Pence then changed the topic once more towards the several riots across the nation and the media’s “selection of choice,” while Harris spoke about the diversity of our nation and the several problems our nation faces regarding individuality.
Winner: Harris

Recent speculation suggests that President Trump will not step down from office peacefully if he loses this coming election. In my opinion, I believe both candidates tried to avoid this question, with Harris explaining her widespread support for her campaign and Pence simply stating, “First of all, we’re probably going to win.” That being said, no one won this topic.
Winner: Draw

8th grader Brecklin Brown submitted her question for the debate, stating “When I watch the news, all I see is arguing between Democrats and Republicans. When I watch the news, all I see is citizen fighting against citizen… If our leaders can’t get along, how are the citizens supposed to get along?” Pence responded by citing the friendship of late Justice Ruth Bader Ginsburg and late Justice Antonin Scalia, stating that although they were on opposite sides of the political spectrum, they were still the best of friends. He elaborated by ensuring that he will work on bringing the government closer to that type of friendship. Harris cited the protests in Charlottesville in 2017, and stated how Biden would work to unite those in the government.
Winner: Pence

All-in-all, the debate last week struck a huge turning point for the candidates. Both were able to convince the American people on their views and elaborate on them. In terms of who’s winning the election, it’s a huge toss-up between who will hold the highest position in the United States and who runs the country along with them. All I can say is, maybe the real winner was the fly.