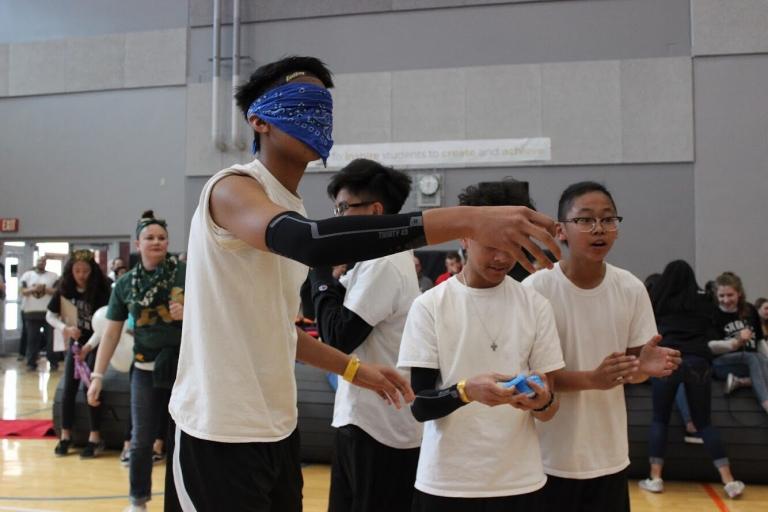 While competing for first place, freshman Laurenz Moceros throws frisbees blindfolded into a kiddie pool. Teams competed in games throughout the week and attempted to get to the top four places to compete in the assembly. Photo Credit: Shareen Basyari

After a week of playing games, the top four teams were announced during an assembly hosted by StuCo. The teams included Israel, Japan, France, and China. The scoreboard started and ended with Israel in first place.

“I thought our win was well deserved,” Avenido said. “We participated in everything. We supported other teams in times where we lost. We were super dedicated in the week of Coyote Olympics. Everyone did a great job competing.”

During the assembly, the top four teams from the week went head-to-head in five games. The teams played the first game, where they had to untangle themselves from a human knot.

“When we first started, I thought it could go to any team.” senior John Paul Avenido said. “Primarily I was worried about the France team because they were my friends and I knew how athletic and competitive they were. I just knew we had a fair chance at winning the gold.”

Teacher superlatives were announced after the games were played. In between games, Cheer, Poly, and, after winning first place, Lip Sync Battle winner Drama Club performed.

“Honestly it was pretty scary, I hadn’t performed in front of such a large crowd before,” sophomore Ayame Faria said. “But it did feel pretty cool once we started to perform.”

For the first time, the assembly concluded with a rap performance from History teacher Joseph Juliano. “Most Likely to be a Rapper” winner Henry Castillo gave his sask to Juliano at the end of his performance.

“My favorite part of the assembly was Mr. Juliano’s freestyle because it was in the spur of the moment and probably one of the best things I have ever seen,” junior Cecilia Gonzalez said.