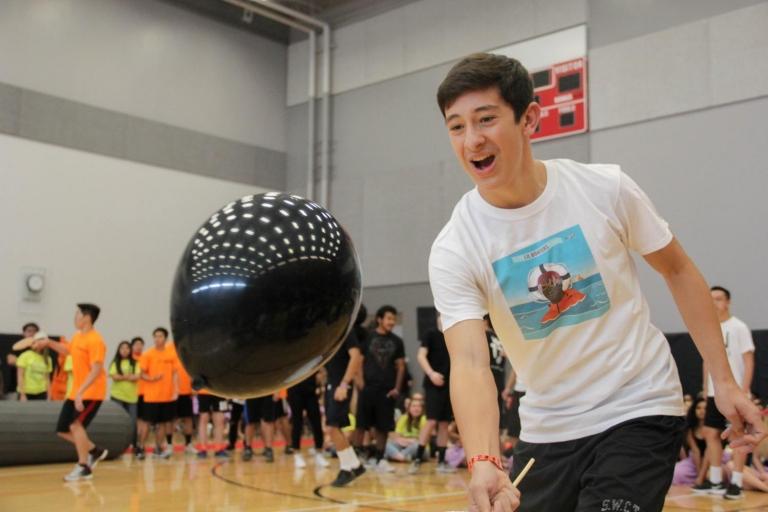 While walking across the gym, senior Nicholas Pudar attempts to keep the balloon from touching the ground on Mar. 30, 2017. At last year's games, the teams participated in challenges to compete for first place. Photo Credit: Justine Ho

Taking inspiration from the 2018 Winter Olympics, this year’s Coyote Games will begin on Monday as the “Coyote Olympics” with 24 teams participating, including a team of teachers. The Coyote Olympics will feature a range of different games from dodgeball to field day activities.

“I love the teacher team,” Julian said. “There have been years when a teacher or two was on a student team, but never before have we had a full team of teachers. I am excited to see what happens.”

Coyote Olympics conclude with the championship assembly on Friday. The teams with the most points will be able to compete at Friday’s assembly.

“Drama Club was the first place winner at the Lip Sync Battle, so they get to perform [as a prize],” junior Cecilia Gonzalez said. “Cheer and Poly are performing before [the games start], and Drama Club will be after. Their performance at Lip Sync was really entertaining, and I wish them nothing but luck.”

“[Last year’s games] were taken too seriously,” sophomore Raymond Vitella said. “[Players] should just remember to enjoy themselves and the people around them, whether or not they are on the same team, to have fun.”

At the assembly, finalist will go head-to-head in challenges that will determine the winning team. Winners of the teacher superlatives will also be announced.

“Winning the [Coyote Olympics] might be difficult this year because I’ve seen the other teams and who’s in it and they’re looking pretty good,” sophomore David Paleracio said. “This year will be my first year in the [Coyote Olympics] and I hope my team and I will pull through and at least make it into the championships.”