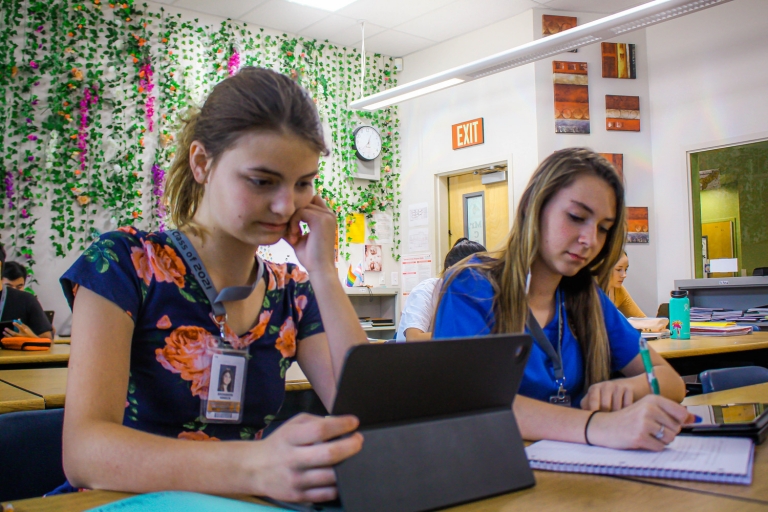 Working on their assignments, juniors Bronwhyn Hansen and Sophia Priola complete their work for their speeches. The new ID policy was put into place at the beginning of the school year by the district. “It hasn’t impacted me that much because last year I always wore it around my neck,” Hansen said. “I know it gets annoying for other people, though, because they want to put it on their belts and everything.” Photo Credit: Juliana Borruso

After the administration chose to require all students wear their identification cards while on campus last year, the Clark County School District has adopted this policy for all schools. In addition, students on campus are now required to wear a colored lanyard to identify what grade level they are in.

“I think last year was more of a transition year because they didn’t have to wear ID’s [before],” assistant principal Donna Besser said. “I think that [the new policy] is an adjustment. Some kids still think that the lanyard part is optional, so they’re learning that.”

Before the new policy was put into place, the rule that said ID’s had to be around a student’s neck was more relaxed, allowing students to wear it around their waistband. Additionally, every student could wear any lanyard they wanted.

“We allowed students to wear them anywhere on their body last year and that got too difficult to control,” assistant principal Trish Taylor said. “They need to all be on the same place around their neck, where they’re visible so we don’t have to feel uncomfortable about looking for someone’s ID.”

“I liked it better when we could wear the lanyard where we wanted,” sophomore Brooke Young said.  “I understand that it’s for safety, but the other one was just more convenient. I could wear it around my waistband or tuck it into my pocket, but now that I have to wear it around my neck, it’s a little bit more annoying to get it to go with my outfits in the morning.”

The updated ID policy was created by CCSD to improve safety in schools. The policy is reactionary to the fact that there has been several instances of security breaches on CCSD campuses.

“Mostly it was just really hard for us to find and get [students] through and visible,” Besser said. “You see those lanyards when they’re worn around your neck. [Now] I think everyone got used to the idea of wearing [ID’s] last year, so it’s not a super crazy [transition] this year. Currently, I don’t see a lot of kids not liking it.“