Club preview: A look into the week of March 11 Studio K, Poly, Environmental 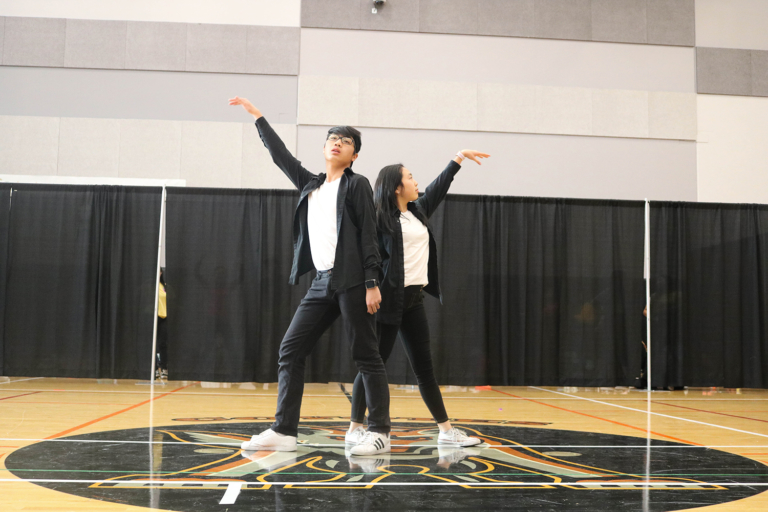 While performing Siren by Sunmi for Lip Sync Battle, freshman Sean Tran and Jennifer Luong do the final move for their dance piece. After Lip Sync Battle, Studio K board members continued practice for Las Vegas Dance Marathon and began preparing for the Spring Potluck. "I felt really ecstatic while I was performing for Lip Sync Battle," Tran said. "That was my first K-Pop Duo performance and I wanted to show the audience how well me and my partner have practiced by giving them a good show." Photo Credit: Lauryn Kern

Starting off the fourth quarter with a fresh start, Studio K is holding board elections for the 2019-2020 school year and a potluck on Thursday, March 21.

“I hope that many people show interest in becoming leaders and role models in the club,” Studio K President Binh Tran said. “I am graduating this year, so our club is trying our hardest to find the next president and train them to be ready.”

Voting for elections will be at the second annual Spring Potluck, which will be held in the Coyote Ballroom. This will be the last get together for the three out of four board members that are graduating.

“This will probably be an emotional time since [most of the board members] are leaving,” Tran said. “It will also be a time of celebration, though, for the hard work we have put into our performances.”

As Coyote Games comes to a close, Poly members are finalizing their performance for the assembly on Friday, March 8.

“For Coyote Games, the girls in Poly Club have been practicing a dance that I choreographed beforehand,” senior Jessica Mones said. “It was on a pretty late notice when we realized that we were performing at the Coyote Games, so the girls actually had a week to learn and perfect the dance.”

Since Poly has performed at the Coyote Games assembly before, they know what their priorities should be when preparing on a time crunch.

“We’ve been doing drills and going over the dance as many times as we can,” Mones said. “But I am still confident that the girls are going to walk out there confidently and try their best.”

“The club wanted to pick Dave ‘n’ Busters because of how many students go there, and give them somewhere to go to enjoy themselves,” Environmental Club president Kyla Norman said.

Students can buy one of these cards from Ms. Martha Horner in room C-201 or one of the Environmental Club members. The cards range from $10-20 each.

“I personally believe that, with this money, we can get more filters for the fountains and continue to [prevent trash from getting] picked up around campus,” Norman said.