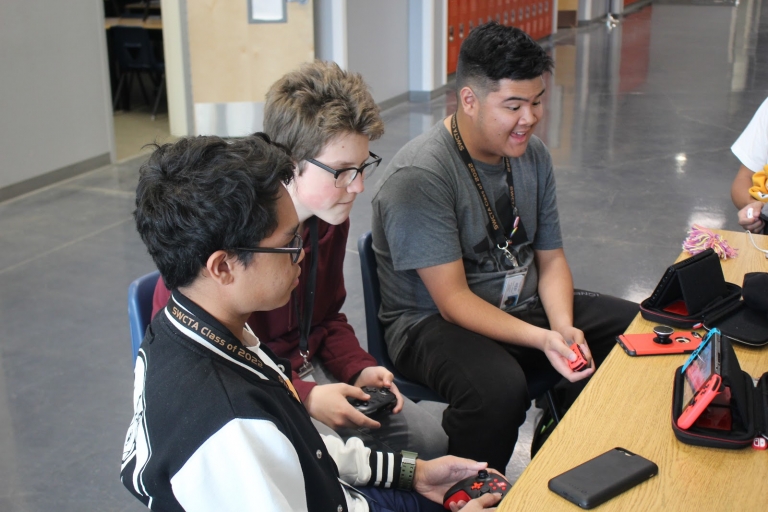 “We usually learn specific dances to use in our performances [like Coyote Coachella],” Tran said. “I also [am excited to] increase my overall knowledge on K-Pop choreography.” Trying to win, sophomores Joshua Abreu, Presley Fisher and Marcus Suarez compete against each other in Super Smash Bros. E-Sports club members spend most meetings playing against each other as practice for local gaming tournaments and events. “We have spent a lot of time practicing,” Fisher said. “I think most members are just hoping all this practice will help them perform better at local tournaments.”

Preparing for their first performance, Coyote Music Association Band Club members are practicing the songs they plan on playing at Coyote Coachella in April.

“We have a range of songs we are playing,” Band Club member Thomas Schotik said. “We recently just introduced a new song into the lineup, and we are spending time playing them all as a band. I feel as if we have made very good progress.”

The band selected the song “OBLIVIUS” by The Strokes, which will be the ninth song in the band’s lineup. This is not the first song they have used from “The Strokes,” as they also have the song “At The Door” in the lineup.

“We have made great progress so far,” Schotik said. “I didn’t expect our band to be able to learn all these songs this quickly, but I am hopeful for the future and our possible performance at Coachella.”

“I feel as if a lot of the members are really ready to actually win the Game Nest tournament,” E-Sports member Joshua Abreu said. “I hope that me or [any] of our members is able to secure first or even second place.”

The tournament is being hosted at the Game Nest arcade on March 13. The competition is optional for all members.

“Though this event isn’t as big as LVL UP Expo, it would still be a point of pride if one of our members wins,” Abreu said. “[Winning] would be a big step in building our club’s prestige in more serious gaming environments.”

As their performance season begins, K-pop club members are learning the choreography to their next dance number.

“I feel very excited for this next meeting,” K-Pop member Sean Tran said. “I am excited to learn new dances while increasing my own skill with K-Pop dances.”

Since the Las Vegas Dance Marathon was canceled, K-pop members will be performing at Coyote Coachella and the Senior Send-Off assembly.

“We usually learn specific dances to use in our performances [like Coyote Coachella],” Tran said. “I also [am excited to] increase my overall knowledge on K-Pop choreography.”