PRO/CON: Everything in moderation The Second Amendment shouldn’t be taken to extreme lengths 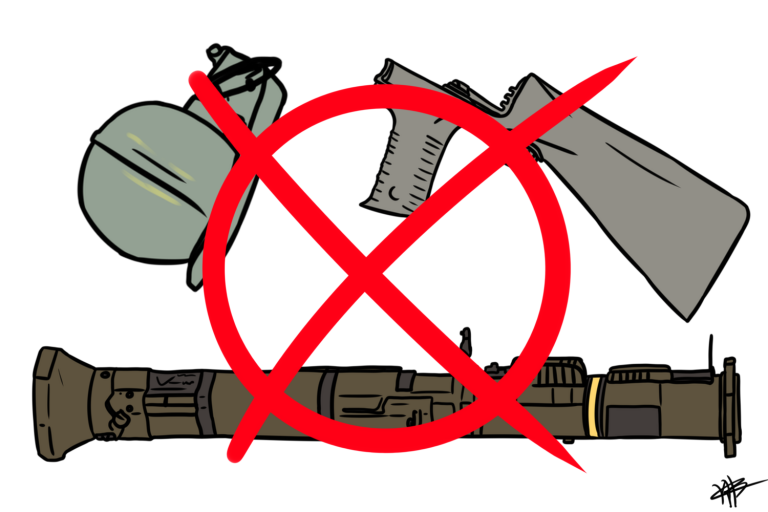 Legislation regarding gun use and other modern weaponry should reasonably interpret the Second Amendment. Art Credit: Kamiran Hinton

To read Jackson’s perspective on this topic, click here

The Second Amendment of the U.S. Constitution, unfortunately, failed to prepare for the future in regards to specific wording on what exactly it enforces. The extent of “the right to bear arms” is certainly up for debate, however, there are logical limitations and interpretations of it. As the Second Amendment was written so civilians could defeat a tyrannical government, the capabilities of the weapons allowed by it should be sufficient to fulfill that role.

There is a lack of general public knowledge in regards to the capabilities and realities of fully automatic and military-style weapons. Fully automatic fire is impractical at best in regards to actually hitting a mass amount of targets and thus is contrary to the guerilla-style warfare which would be needed against a modern military. Additionally, the paperwork required for tax stamps, which cost $200, and an application process that often takes months. Tax stamps are the government’s way of tracking and approving restricted item purchases. They are generally required for short-barreled rifles (rifle caliber firearms with short barrels, known as SBRs), suppressors, and automatic weapons. Tax stamps, while a lengthy process, are not sufficiently difficult enough to obtain so as to loosen the requirements on them while following the logic of fighting a modern army.

As stated before, civilian fully automatic weapons are impractical against a modern military. SBRs, with their shorter barrels, generally fail to give a bullet enough velocity to penetrate the armor plates of soldiers. Suppressors would be useful against a military, however, they have huge benefits if criminals were to obtain them and thus are too dangerous to allow easy access to.

While handguns are involved in the majority of gun homicides, shootings are done with (often military-style) rifles that have frequently topped record amounts of killings in the same crime. Additionally, handguns are by nature much easier to conceal and as a result, are more likely to be used in crimes that take place in areas where guns are supposed to be banned. Finally, handguns again fall under the premise of being impractical against a modern army, as their bullets are too small and low velocity to sufficiently penetrate armor plates or even engage targets above a few dozen feet. As a result, the heightened restrictions placed on handguns in many places are justifiable as their use is more frequent in crime and they aren’t particularly useful.

There is an excellent point to be made in regards to the hypocrisy and general poor reasoning involved with firearm attachment laws. These regulations are most often set in place purely for political showmanship and often make guns more dangerous as the ridiculously shaped pistol grips lead to a reduction in ergonomics. However, a few of these regulations are justifiable. Bump stocks (which use a gun’s recoil to jitter the shooter’s finger into repeatedly pulling the trigger,) while being even less practical than genuine fully automatic fire, also can lead to accidental shootings as the wildly unpredictable recoil could send the barrel pointing towards an innocent person.

While more guns in a country obviously lead to more gun-related deaths, and the Second Amendment bars guns from being banned outright, the exact capabilities of a weapon should still be regulated so as to prevent unnecessary civilian deaths. The sale of, for example, an AR platform rifle shouldn’t have restrictions, while putting a bump stock without reasonable purpose should have restrictions.

It is said that due to guns being used for self-defense frequently, their acquisition should not be impeded. However, the reality is that, for the purposes of self-defense from a common criminal, gun laws in the vast majority of states are more than sufficient. While exceptionally harsh states like California exist, most of the U.S. allows for the shotguns, rifles, and handguns along with their appropriate ammunition that would be needed for self-defense.

To conclude, firearms by themselves are perfectly fine and justifiable by the second amendment. However, with the exception of personal enjoyment, there is no justifiable reason to own potentially dangerous attachments including bump stocks or their functionally identical triggers. These attachments would not serve a civilian any better in a guerilla war, and their use is often impractical in self-defense. Explosive weaponry, both anti-personnel and anti-armor, while potentially extremely useful against the normally impenetrable armor found on some military vehicles, are simply too dangerous to freely allow to civilians. Guns can and should be an enjoyable pastime for anyone who wishes to use them, but the exact extent to which they should go should be reasonably limited.