They Love Our Culture, But Not Us The fashion industry exploits Black people 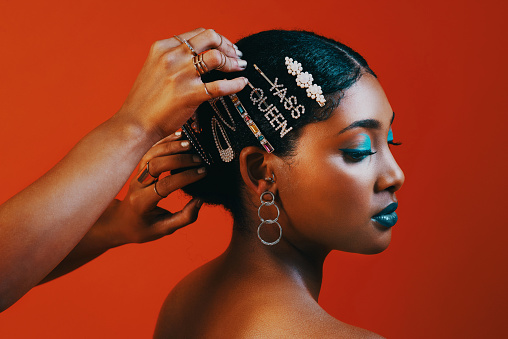 The fashion industry takes and sells our culture to non-black people, but then turns around and does not cater their products to us, support our movements, or help our communities in any way. They exploit us. Photo Credit: Unsplash

You go to Gucci’s website because you found out about their new collab with Balenciaga, and it’s the first thing to pop up, obviously. “Now available: The Hackers Project,” it reads as you click on the huge “Shop the Collection” button. You’re greeted with a banner that changes pictures to display the new items, and in each photo is a Black model styled in the collection’s pieces. Every tab you click, item you press, or category you choose, there is a Black model photographed in the product, more than any other race.

Lately, I have been seeing a rise in companies using Black models to sport their products. The rise of Black influence has been astronomical, but why? I was scrolling through TikTok and came across a small fashion companies’ page called “Hawk Imperial Clothing.” The video that popped up was titled “The Truth Behind Commercial Fashion Brands,” where a member of the company explained how the fashion industry uses Black people to sell and promote their products, yet do not cater to Black people or help our communities.

Being a part of the Fashion Design program at school and my interest in becoming a menswear designer in the future, I’ve looked at and paid attention to many fashion companies, including their products and promotions.  I see how they take our ideas, looks and skills to make money, yet create a space where we are not welcome, humiliated, and deemed to be not beautiful enough to represent beauty in the fashion industry.

I remember learning about Dapper Dan, one of the most iconic Black designers of our time, and how poorly he was treated by the fashion industry. Designer brands like Louis Vuitton and Gucci would see the clothes he was making and how it was something new, and then steal his work by putting it on the runway and not give him any credit. They tried to stop Dan from creating iconic clothing because they were mad at the fact that they did not think of it first and couldn’t take the credit, so they shut it down and stole it instead. This is a common occurance where companies will steal what Black people have created, or hire us to make it for them and then take the credit.

Sneaker culture, streetwear, hoop earrings, braids, all these representations of Black culture have now been deemed to be ‘American culture” because of how mainstream it has become. With us finally making our own culture and embracing it, non-black people all over the world have now also decided to partake in what we have created. There are people of all racers, cultures, and backgrounds that appreciate Black culture and partake in it, but fashion companies see that and exploit it.

It bothers us when we see other people indulging in our culture because for a while, we were not even allowed to partake in what we made. Streetwear was considered to be thuggish and ugly when it was something only we were doing. Braids were unprofessional to wear in the workplace or even school, so we were forced to cut our hair or take the braids out. Big hoop earrings were obnoxious and dropping so much money for a pair of shoes was considered foolish.

It was only when mainstream culture decided to start doing the same thing was it then considered acceptable by society. That’s when brands realized how influential Black people are and how popular the things we make become.

Not everyone who participates in Black culture are culture vultures. The real thieves are the companies and brands copying what we create and making it accessible to everyone but us. This country and the people in it, with the exception of a few, benefit from the hard work and perseverance of Black people, and that extends to fashion.

Instead of buying into these fashion companies’ exploitation of Black people and our talents, call them out or stop buying from them and instead try and buy from Black owned brands. Wear your Tupac shirt but remember that he is the son of a Black Panther member and fought for Black people and what we can do. Wear your hoop earrings and chains with your graphic t-shirt, but remember who paved the way for those fashion trends and styles you emulate, and respect the people who are the blueprint.

Type to search or hit ESC to close
See all results
wpDiscuz
1
0
Would love your thoughts, please comment.x
()
x
| Reply