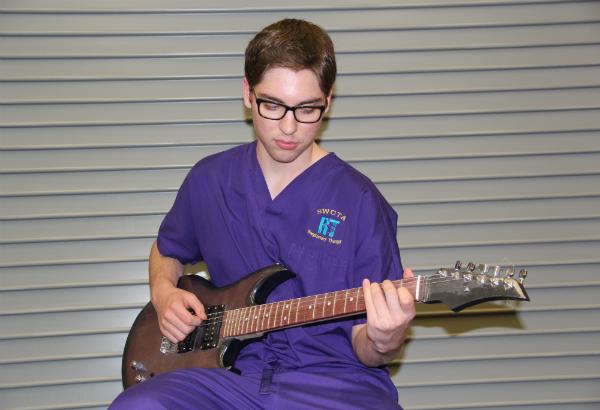 With the commonality of electronic music comes the impending loss of a pastime from which we can all draw benefit, and this benefit can last much longer than a person may otherwise believe.
Photo Credit: Kevin Rodriguez

This week, the Southwest Shadow welcomes its newest columnists, Tyler Antonio and Brandon Hatch. Their column “Odds & Evens” will be posted weekly, with Antonio posting on even weeks, and Hatch posting on odd weeks.

Technology grows, the world accelerates, the present becomes the past and hobbies are shed to welcome new methods of curing boredom. This is the universal cycle of pastime evolution, and rightfully so; after all, the average American teen no longer prefers to sit at a loom or observe their favorite sporting events through a crudely tuned radio. Certain relics of entertainment persist, however: baseball, chess, dominoes, and most prominently, musicianship.

Music is, and always has been, all around me. Every day of my life, I pass some assortment of intentionally organized sound and think nothing of it, because it is simply so common and so established as a human characteristic. For some, it is a driving force. For others, it is the spark that ignites an array of emotions otherwise left dormant. It has to come from somewhere. It comes from those who, at some point, chose to take on music as an art form, or as a way to pass their time. Becoming a part of such a massive movement is more rewarding than one may anticipate, and can offer much more than just the ability to produce sound.

[vision_pullquote style=”1″ align=””] Musicianship is evergreen—it is humanity’s universal communicator; it is artful expression; it is a mind-healthy, cost-effective means of erasing empty hours. [/vision_pullquote]

As detailed in a publication by USA Today, “Researchers found that those who played an instrument for two years showed a stronger ‘neurophysiological distinction’ between certain sounds than children who did not get the instrumental training. For instance, the music-makers could more easily tell the difference between the words ‘bill’ and ‘pill,’ a key skill in learning to read.”

Picking up an instrument prompts neurological growth, auditory adaptation, motor coordination and the maintenance of a sound mind as a person ages. It has also been known to refine patience and learning ability, along with the harboring of self-esteem among dedicated players.

As resources grow, the availability of any conventional musical instrument is high, and nearly any price range is feasible. For example, if an electric guitar is desired and a buyer’s income does not agree with many of the posted price listings, a full-scale Fender Squier model can be obtained for as little as $79 or less, and will last for as many years as the buyer pleases. If approached with the correct intuition, becoming a musician can be one of the cheapest, long-term hobbies conceivable.

Musicianship is evergreen—it is humanity’s universal communicator; it is artful expression; it is a mind-healthy, cost-effective means of erasing empty hours.

Face the music, and feel free to make it, too.