THE OFFICIAL SOUTHWEST SHADOW 2020 ELECTION LIVE BLOG Want to understand the results as they come? You've come to the right place! 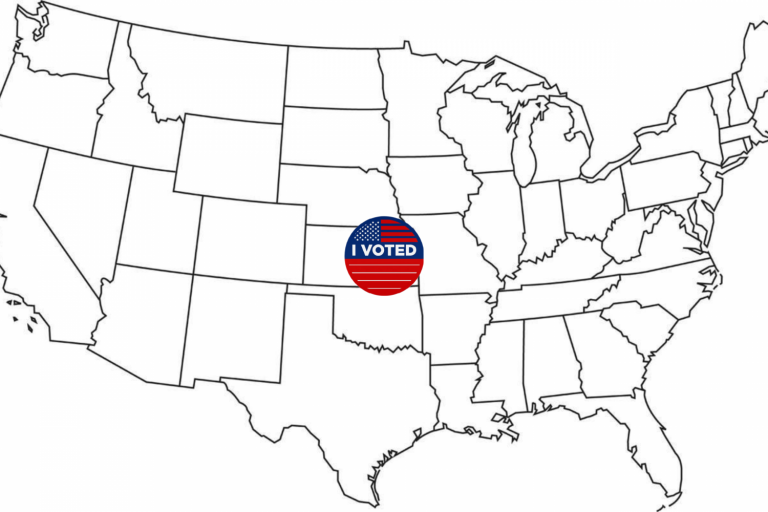 2:40 PM: The day is here! In just a few minutes, the first state polls will close, and the first (well, “first“) results of the election will be known! Joe Biden currently holds a large lead in the polls, up around 8 points in the FiveThirtyEight polling aggregate nationally, and several points in key swing states like Michigan, Wisconsin, and Pennsylvania. This doesn’t mean that Trump has no chance, however-he could outperform his polls significantly to get to 270 votes, as legendary forecaster and analyst Nate Silver points out. On the other hand, Trump would need to outperform the polls significantly more than basically any presidential contender has done in modern polling. Possible? Again, yes. But not likely. There probably won’t be too many updates until around 4:00 PM, which is when the first polls close in Florida in Pacific Time (and other states, but most importantly Florida.) In the meantime, try to relax. Talk to some friends, take a jog, play a game you like, and not obsess over any inkling of data that you may see (in other words, the exact opposite of what I’m doing right now.)

UPDATE 3:15 PM: Is it a good idea to gauge a presidential race on half the results from one county? Absolutely not. However, if you were to do so, the Greene County, Indiana election results are less than ideal for Trump-with half the vote in, Trump is winning by 38 points, while he won by 54 points. Again, don’t take it too seriously, we don’t yet have full results. Though it is interesting.

UPDATE 3:45 PM: We still only have Kentucky and Indiana results so far. No full county reporting. Also, what percentage of results are early voting versus Election day is ambiguous as far as I know (Democrats are way likelier to vote early and by mail, Republicans in person and on Election Day.) Again, don’t think any county has fully reported. Let’s be careful.

UPDATE 4:50 PM: a bit late, but polls have closed in Virginia, Vermont, most of Florida, South Carolina, Georgia, and parts of North Carolina. The worst result for Biden is winning the early vote in Miami-Dade by only nine points. That’s awful for his chances in Florida, when people were already  ringing alarm bells over weak Democratic turnout in the county. He’s doing quite well in the rest of the state, though. My money’s on Trump in Florida now, though it’ll be close. Rest of the country is too early to call.

UPDATE: 5:25 PM: This is a big one. Decision Desk HQ has called the race in Florida for President Donald Trump. This makes Biden’s path to 270 a decent bit thornier. Things are looking better for Trump than they were before polls closed. How much better? It’s hard to say. Still looking for more results, but we can say that this is going to be a long night (likely.)

UPDATE 5:45 PM: Things are looking increasingly good for the Trump campaign. Trump is picking up big with Hispanic voters, according to exit polls, not just Cubans. Can Biden close the gap with white voters? Not sure. Again, it’s pretty early. But things are looking a lot better for Trump than they were before. Trump looks like the favorite in Georgia, and North Carolina is hard to tell-guess you could call it a tossup.

UPDATE 5:50 PM: Also, here’s the map of poll closings if you folks are looking for it, from the Democratic organization DailyKos. 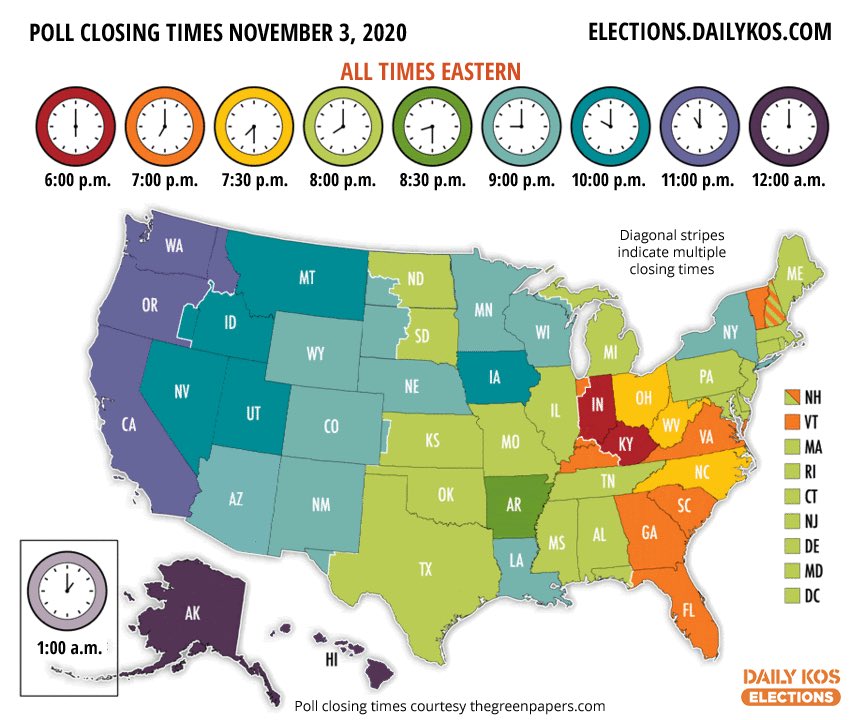 UPDATE: 7:30 PM: I think it’s fair to say now that Trump is the favorite. We likely won’t know the actual results tonight, but he’s clinched Georgia, almost certainly won North Carolina, and very well may be the favorite in Pennsylvania. The road 20 270 electoral votes for Biden is getting tighter and tighter. Also, Trump’s seismic support (relatively) from Hispanics may make Nevada more competitive. Jon Ralston, a legend in our state, predicted a Biden victory, and his predictions should be taken pretty seriously-but Biden’s utter collapse among Hispanics could make the race more competitive. One bright spot for Democrats is Arizona-the early voting results there make it unlikely that Trump wins. Totally possible, but he seems to be struggling here. Nebraska’s second congressional district is going to be key-if Biden wins it, he can get to a bare victory be flipping Arizona, Wisconsin and Michigan. Without it, the race is either a 269-269 tie, (in which Trump would win because of a Republican majority in state delegations) or Biden has to win Pennsylvania. Here’s the one thing we can feel pretty comfortable saying tonight: The polls were wrong. Biden may win, (I still have him as an underdog) but it is going to be very narrowly if he does.

UPDATE: 7:55 PM: Some not awful news for Biden-Nate Cohn of the New York Times notes a reporting error that calls North Carolina’s rosiness for Trump into question. With the race in the state as close as it is, I’m not entirely sure what could happen. Still think Trump is a favorite, but…well, like I said, it’s going to be extremely close.

UPDATE: 5:30 AM: Well, if this election isn’t a roller-coaster, I don’t know what is! Arizona was called for Biden late last night. The loss wasn’t exactly disastrous for President Trump, who held multiple paths to re-election without the Grand Canyon state. However, with Nebraska’s second congressional district being called for Biden, he now faces himself in a bit of a pickle. The four remaining states are Georgia, Wisconsin, Michigan and Pennsylvania, all states he won in 2016, the latter three all by less than a point. The problem in all four states is pretty simple-Trump is currently leading, but the remaining votes to be counted in overwhelmingly Democratic areas, with a very strong possibility to push Biden over the edge in all four states. If all four states vote for Joe Biden, Biden’s electoral college margin would match Trump’s from four years ago. Biden needs at least two to get a narrow 270 electoral votes win, and my money is that he wins three of them.

UPDATE 5:35 AM: Also, with most of the votes in Nevada counted, it looks like Biden carries the state, without a surge in Hispanic voters for Trump materializing. We likely won’t know for certain who wins the state until tomorrow, but it really does look like Biden is the strong favorite here. Also, Trump’s announcement that he wants to throw out ballots that haven’t been counted yet is…odd. It’s legally baseless, and there’s not much more to say about it than that.

UPDATE NOVEMBER 5 10:00 AM: Most of yesterday was just excruciatingly slow counting. Fox’s call in Arizona is looking increasingly premature, with late Republican ballots keeping Trump competitive. The biggest story right now is them *finally* counting more ballots in Nevada. Biden’s lead in the state is around one point, a little worse than Hillary Clinton’s margin in 2016, but there are way more votes in Clark County than the Republican rural areas. If Biden wins Nevada, he needs one of Georgia, Pennsylvania or Arizona (or North Carolina, but that is exceedingly unlikely) to win the Presidency. Pennsylvania is looking solid for Biden, as the remaining votes to be counted are overwhelmingly democratic. Similar story in Georgia, though my bet is that there aren’t enough votes in Atlanta to carry Biden to victory. That’s actually a similar situation to Arizona, where it’s not likely that the remaining votes are enough to get Trump to 270 votes.

Of course, the most important development of the past 24 hours is that both Georgia senate seats will go to a runoff election. So if Biden wins, control of the senate would go down to the wire in those two key states (because, of course, 2020.) Folks, this is going to be a nail-biter.

UPDATE 4:15 PM: Continue to expect a nail-biter in Georgia, folks-only a couple thousand more votes left. A Biden win here would very likely seal the deal for Biden, a Trump win in the state would mean quite a long night. Can Trump still win the election? Yes, he can. But it’s a big, big uphill battle.

UPDATE 11:20 PM: The path to 270 votes for Trump is-slowly but surely-narrowing. As Georgia goes down to the wire, it’s growing increasingly likely that Biden flips the state. It’s not a guarantee, Trump still has a strong chance in my view-but with Trump’s lead having struck to 0.02% in the state, (not a typo) Biden seems like the favorite. Mix that with Biden continuing to chomp away at Trump’s lead in Pennslyvania, and…well, Biden remains the favorite as of now. Arizona seems incredibly close right now, with the remaining Republican-leaning ballots likely to make the state look like a complete tossup. Nevada hasn’t really changed, but we can continue to consider that a strong state for Vice President Biden. It’s not over, you would much rather be Biden right now.